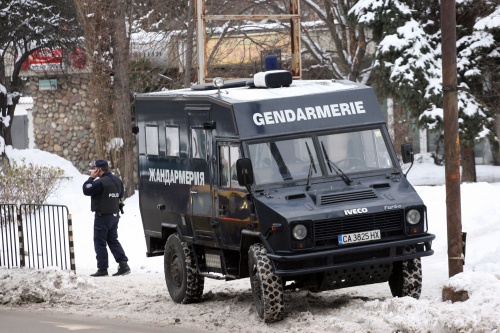 Police is searching Wednesday the premises of the Sofia “Spartacus” Stadium where Aleksey Petrov's offices are located. Photo by BGNES

A total of 14 suspects, including a former top secret agent, have been arrested by the Bulgarian police as result of an overnight special operation codenamed “Octopus” aimed at smashing an organized crime ring.

The operation was announced early Wednesday morning by Bulgarian Interior Minister Tsvetan Tsvetanov, who said it was a follow-up of the “Impudent” special operation from December 2009 in which 30 kidnap gangsters were arrested, 10 of whom permanently.

The operation is being carried out jointly by the Bulgarian Unit for Fighting Organized Crime – GDBOP, the National Agency for State Security – DANS, the Sofia Police Directorate and the Sofia Prosecutor's Office.

Former agent of the State National Security Agency DANS, Aleksei Petrov, is among the detainees. (More information on his is available HERE)

7 of the alleged members of the large-scale crime group have been taken to the National Investigation Services, according to official police information.

They include Yordan and Plamen Stoyanov aka the “the Dambovtsi Brothers,” Aleksey Petrov aka “The Tractor,” Marcelo Dzholotov aka Marcelo, Momchil Krastev, Nikolay Velkov and a woman - Lozana Slavcheva.

The "Dambovtsi Brothers” are said to have been the closest to former top secret service agent, Aleksey Petrov, who, according to unconfirmed reports, might have been the ring-leader of the group.

The two are also reportedly key “Octopus” figures, involved as owners of the firm "Ecometalengineering,” in the draining of the troubled steel-maker Kremikovtzi. The draining was, allegedly, controlled through the security company guarding the plant. The Brothers are also known to have been close with notorious car thief Gancho Vachkov, aka Ganetsa, who was shot dead in Sofia in 1999 during a police chase.

Police had been looking for several hours for one of the key suspects, Anton Petrov aka The Hamster, who has been summoned to appear Thursday at the National Investigative Services. His whereabouts are unknown. The Hamster turned himself in late Wednesday night.

The Hamster was arrested in December during another high-profile police operation codenamed “The Impudent” and later released on bail over lack of evidence.

The police further inform they are looking for one more suspect in connection with the “Octopus.”