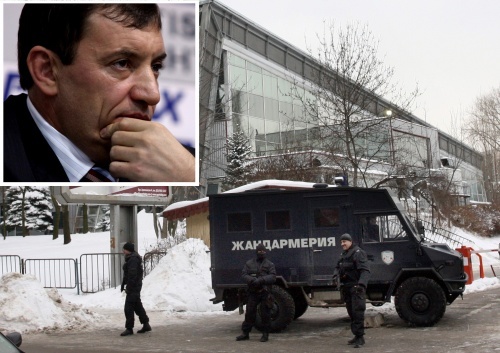 Aleksei Petrov, nicknamed “The Tractor”, has been arrested during the Octopus operation, prosecutors confirmed. Photo by BGNES

Confirming earlier reports, prosecutors made this announcement hours after the police smashed the gang in an overnight swoop in the capital Sofia, dubbed operation "Octopus".

Interior Miniser Tsvetan Tsvetanov said the raid was a follow-up of the “Impudent” special operation from December 2009 in which 30 kidnap gangsters were arrested, 10 of whom permanently.

Early Wednesday morning Minister Tsvetanov announced that a man nicknamed “The Tractor” with initials A.P. had been arrested during the Octopus operation, but denied to disclose his name.

Reports in the Bulgarian media over the last few weeks pointed to former top secret agent Aleksei Petrov as being the man nicknamed “The Tractor.”

Anton Petrov, aka “The Hamster” is one of the two wanted gangsters. He was arrested as one of the leaders of the Impudent kidnappers but was released on a BGN 20 000 bail at the end of January.

Two of the other arrested men – Plamen Stoyanov and Yordan Stoyanov, aka “the Dambovtsi Brothers” are said to have been key figures within the group involved in the draining of the troubled steel-maker Kremikovtzi in their capacity as owners of the firm "Ecometalengineering."

The draining is said to have been controlled through the security firms guarding the plant. The Dambovtsi Brothers are reported to have been close with top car thief Gancho Vachkov, aka Ganetsa, who was shot dead in Sofia in 1999 during a police chase.

There is no evidence that former secret agent Aleksei Petrov, who is said to be the leader of the organized crime group busted in the Octopus operation, was also the mastermind of the “Impudent” kidnappers’ gang, according to the Interior Ministry and the Prosecutor's Office - contrary to speculations in the Bulgarian media.

The “Octopus” special operation of the Bulgarian Interior Ministry started overnight as an inspection of 13 night clubs and 5 striptease bars in Sofia. 130 women were detected by the police who are believed to be working at least part of the time as prostitutes; only 5 have been arrested for whom the police have clear evidence.