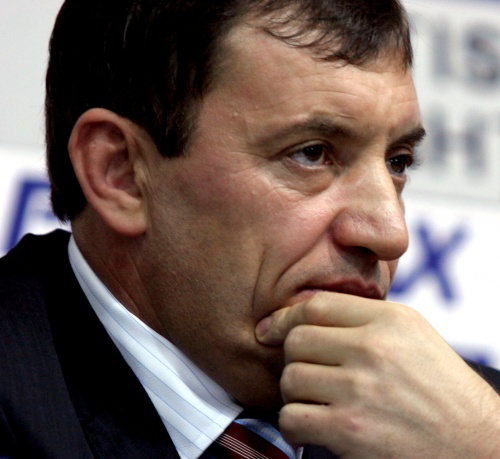 Former Bulgarian secret agent Aleksei Petrov, nicknamed "The Tractor" is reported to have been arrested overnight during the special operation of the Bulgarian police codenamed "Octopus".

Aleksei Petrov was born on April 23, 1962. In the late 1980s and early 1990s, he was part of one of the elite units of Bulgaria’s Interior Ministry – the Specialized Squad for Fighting Terrorism, a squad of commandos whose members are commonly known as “the barrettes.” After quiting, Petrov became one of the founders of the Union of Former Barrettes.

Later he served in Bulgaria’s National Security Service, one of the main directorates of the Interior Ministry, and then entered the private business sector. Before 2000 he was a co-founder and member of the board of the insurance company “Apollo & Balkan”, insurance company “Spartak” (later “Levski-Spartak”), and is one of the owners of the “Spartak” pool in Sofia. He is reported to have had shares in several other firms.

He has been actively involved in the Bulgarian Karate Federation, including as a karate coach, which is where his path crossed with that of current Bulgarian Prime Minister Boyko Borisov, who himself is a former coach of the Bulgarian national karate team.

Before 1998, Aleksei Petrov was a business partner with current Bulgarian Prime Minister Boyko Borisov and Rumen Nikolov, aka “The Pasha” in a firm aimed at promoting karate as a sport. The firm was called “Budoinvest” OOD.

During his term as Chief Secretary of Bulgaria’s Interior Ministry (2001-2005), Boyko Borisov was questioned about his former business partnership with Aleksei Petrov and Rumen Nikolov. Borisov has confirmed about the partnership with these persons while pointing out that he knew them from his career as a karate competitor and coach, and that the aim of the firm was to promote the sport.

He claims it was a total fiasco which led the partners to have “antagonistic” relations to the extent that they did not even agree on collecting their signatures to shut down the firm, and it had to be closed down by the court.

Aleksei Petrov became publicly famous after an attempt was made on his life on August 15, 2002, when he was shot and wounded in the chest and leg as he was on his way out of his office at the Startak pool complex.

As a result of this attempt, it was later revealed that his life was threatened earlier – in March 1999 when he was shot in the leg in the Perla Restaurant in the Dragalevtsi Quarter in Sofia. Petrov is reported to have had dinner together with Toma Borisov, head of “Alpha Security Group” and Kiril Kirov (aka “Kiro Yaponetsa”, i.e. “The Japanese”, an alleged large-scale criminal boss of Roma origin) when Kirov shot by accident as he was charing his gun wounding Petrov. The 2002 attempt on Aleksei Petrov’s life has not been resolved by the police.

Aleksei Petrov has a Ph. D. in economics from the University of National and World Economy in Sofia, and has also been a professor at the same university teaching courses on security and economics.

Aleksei Petrov’s name became publicly famous again in the spring of 2008 when it was entangled in a scandal involving former Interior Minister from the Socialist Party, Rumen Petkov.

Back then Petkov was revealed to have met with the notorious businessmen from the town of Dupnitsa, Plamen Hristov and Angel Galev, aka The Galevi Brothers (currently investigated and jailed for organized crime activities). The name of secret agent Aleksei Petrov leaked as he was also reported to have been present at the meeting.

This revelation was made by Gen. Vanyo Tanov, a former top policeman and current Director of Bulgaria’s Customs Agency appointed in the summer of 2009 by the Borisov government. It was the then Interior Minister Rumen Petkov who announced almost immediately that Petrov had been present at the meeting with the Galevi Brothers in his capacity as an undercover agent of the State National Security Agency (DANS).

Even though Rumen Petkov claimed he had a “working” meeting with the Galevi Brothers, i.e. in order to warn them over their activities, he resigned his position in April 2008 as a public scandal erupted.

Petkov was later tried for revealing the identity of the undercover DANS agent Aleksei Petrov but was acquitted.

Aleksei Petrov reacted to the revealing of his name by Gen. Vanyo Tanov as slamming Boyko Borisov, then Mayor of Sofia, for not controlling better his close associate Tanov.

Petrov was revealed to be a special advisor of Petko Sertov, the former Director of DANS. (DANS itself was set up on January 1, 2008, as the Stanishev government united three previously existing security and intelligence services.

In the summer of 2009, the scandalous case named “Galeria” leaked to the media; it was revealed that under it, DANS operatives spied and had conversations with leading Bulgarian journalists. This is when the former DANS Deputy Director Ivan Drashkov addressed the Bulgarian journalists urging them to ask Petko Sertov if people such as Aleksei Petrov had a place in the State National Security Agency.

Aleksei Petrov quit DANS on August 31, 2009, a month after the Boyko Borisov government took office saying he was uncomfortable in a situation in which he was an employee of Borisov.

In October 2009, a scandal erupted as Boyko Borisov announced that his predecessor Sergey Stanishev had hidden and abused top secret DANS reports by taking them out of his office. One of the top secret reforms (which allegedly disappeared in the fall of 2008) was brought to Borisov’s office by Aleksei Petrov himself.