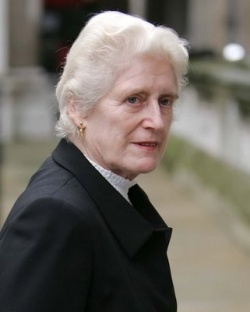 Exclusive interview of Novinite.com (Sofia News Agency) with Baroness Elizabeth Butler-Sloss, a Member of the House of Lords. Baroness Butler-Sloss is a retired judge, the first female Lord Justice of Appeal and, until 2004, the highest-ranking female judge in the UK.

How would you describe the human trafficking issue as far as Bulgaria is concerned, from the UK point of view?

We are here to discuss with government and non-government organizations, and particularly with the Bulgarian Parliament the possibility of setting up a parliamentary group in Bulgaria similar to the one in England and other EU countries. This is so that we can discuss between the EU members the problems of human trafficking and also to be able to exert pressure on the European Commission in Brussels in that respect.

We see Bulgaria as a country from where we have trafficking. Many children come to England, they come on to our metro underground service, and they steal from people. They are trained in Bulgaria to steal. We have other people from Bulgaria who are also trafficked.

These children are trained, they are trafficked, sometimes they are sold, and they are worth a lot of money to the people who manage them. Those who traffic the victims make a huge amount of money.

We see Bulgaria as a country of source, and as a transit country – from Greece, from Turkey, from the former Soviet states. We also see it as a country of destination because now you have your tourist areas, and you will find an increasing number of women for sex there, and many of them will be in fact trafficked.

Are you satisfied with your talks in Sofia; are the Bulgarian authorities eager to cooperate on fighting human trafficking?

We are very impressed with the people we’ve met in Bulgaria. The parliamentarians are discussing the setting up of their own group. We have an inter-parliamentary group holding a conference in London. Four Bulgarian MPs are coming to London; we have met two of them. We are very pleased that they are coming.

We have met the Minister of Interior and Deputy Prime Minister, who gave us lunch today. We have spent time with the Ministry of the Interior, and we have met a great many of the border police, the internal police, the security service; we have met a large number of NGOs. We have been to a crisis center and a shelter. We have met various NGOs in their own areas.

We have been to a Roma community on the outskirts of Sofia where they are doing good work to try to educate Roma children to stay at school, to have the education that would give Roma children the opportunity to get jobs like other people. We have learned that probably about 50% of those who are trafficked are from the Roma community, and the other 50% from the other Bulgarian communities including the Turkish Bulgarians.

Since you mention the minorities, what is your view on the best way to tackle human trafficking in Bulgaria – is it a matter of integrating the minorities into Bulgarian society, or is it more a question of administrative measures?

It’s two things. I think one is education, and the other is money. Because the NGOs are doing good work. They are working with your national commission against human trafficking. The Bulgarian commission has a very impressive Secretary-General who works to the Minister of the Interior, and we have met her – she is very impressive!

Of course, integration as full members of the Bulgarian community is important but part of that is education. And until the Roma are educated it is more difficult for them to find jobs, to find decent housing, and to play a full part, to have proper respect from the rest of Bulgaria. If they are uneducated, in poor housing, and no employment, they are not going to have it.

How do you think the human trafficking issue is going to play out with Bulgaria’s upcoming accession to the Schengen Agreement?

As an English person, I should point out that we are not part of Schengen because we are an island.

But Bulgaria has a very porous border. You have a border with Turkey, with Macedonia, with Serbia, with Greece – you have a lot of problems with Greece. Do you know that Roma women are getting pregnant, going to Greece and selling their babies to have enough money to pay for the rest of the family?

Bulgaria has so many borders that I don’t think the Schengen Agreement will make much difference. I don’t see how you can improve your border problems thanks to that. Of course, the Bulgarian border police are very aware of it but it is remains a problem to be dealt with.