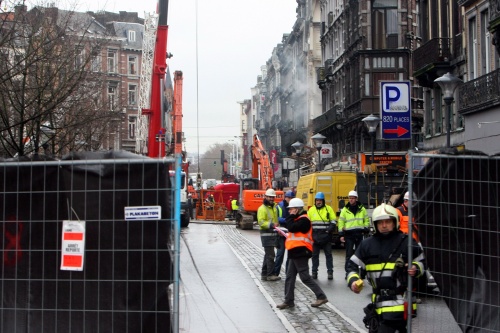 Fire fighters close the barrier to the site, after the January 27 gas explosion destroyed a five floor house in downtown Liege. Photo by BGNES

The Belgium authorities released Saturday the names of the 3 Bulgarian citizens, who have died during a blast of a building in the city of Liege.

The explosion happened on January 27 and reports about Bulgarian casualties have been quite contradictory. It was reported first by Bulgaria's Deputy Foreign Minister, Marin Raikov, that 4 Bulgarians died in the collapse and 2 were injured. The Foreign Ministry later disproved the previous reports, saying according to the Bulgarian Embassy in Brussels, no Bulgarians were killed by the explosion.

The injured Bulgarian women reported at the time that 4 other Bulgarians might have been buried under r the ruble.

On Wednesday, a woman from Bulgaria's village of Probuda, near the city of Targovishte, stated that if Bulgarians have died in the building blast in Liege, Belgium, they are her relatives.

The 3 Bulgarian citizens have been identified through DNA probes from their relatives in Bulgaria. The sister of one of the victims, who lives in the Netherlands, had said she will arrange for the bodies to be transported back to Bulgaria.

The causes of the blast are steel being investigated, but the Liege Prosecutor’s Office says the building has been in compliance with safety requirements.

The rescue operation cost is estimated at EUR 1,5 M.