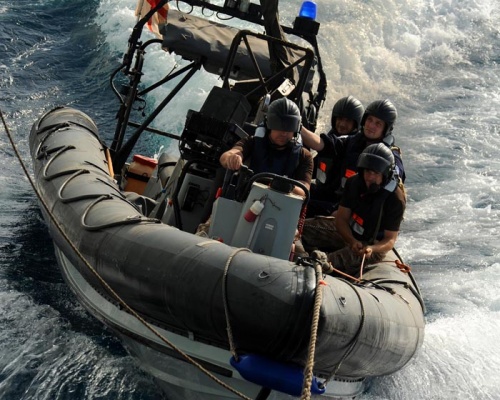 A Bulgarian sailor is among the crew rescued from Somali pirates by a boarding party of Danish forces of EU NAVFOR. Photo by nato.int

Special forces of the Danish Navy warship "Absalon" have stormed a ship captured by Somali pirates and released the 25-man crew - including one Bulgarian - unharmed.

Following a distress call from the captured cargo vessel "Ariella" on Friday morning, an international sea and air response resulting in the boarding of the cargo ship by Danish naval forces, according to EU NAVFOR spokesperson, Commander John Harbour.

Somali pirates had reportedly captured the "Ariella" only a few hours before the distress call was sent.

The elite naval forces had scaled the ship's side, and freed the crew, who had locked themselves in a secure room. Meantime, sailors from the nearby Russian Navy ship Neustrashimyy boarded and detained pirates aboard a second skiff, said NATO spokesman Wolfgang Schmidt.

Some details of the still ongoing operation have remained sketchy. The precise location of the vessel has not been disclosed, but the nationalities of the crew members have been announced, according to FoxNews.

The crew comprised a Bulgarian, a Slovakian, an Indian, 15 Filipinos, and 7 Ukrainians, the EU Naval Force said. They are all said to be safe and well.