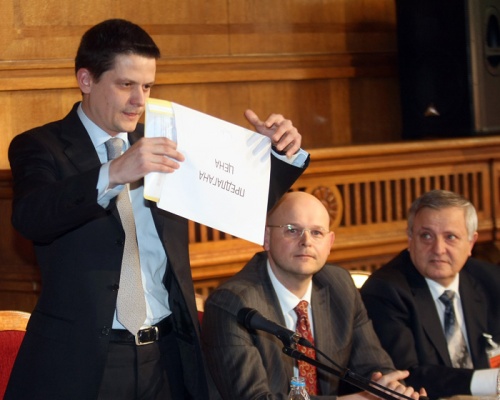 Bulgaria's Ministry of Regional Development and Public Works opened Friday the bids for the construction of a section of the Trakiya Highway. Photo by BGNES

Bulgarian construction company "Unified Highway Trace" has submitted the lowest bid for construction of Lot 2 of the Trakiya Highway.

Four of the eight eligible bids for the highway project have been opened on Friday. According to the bid specifications, price is the principal criterion.

Rosen Plevneliev, Minister of Regional Development and Public Works explained that applications with lower bids had not been opened, as they did not meet all the criteria set by the developer.

He added that he had complete trust in the judgment of the selection committee, as five of its nine members are "expert" in the road construction sector.

The Minister had earlier confirmed that actual construction of the 32 km section of highway will begin on May 3.