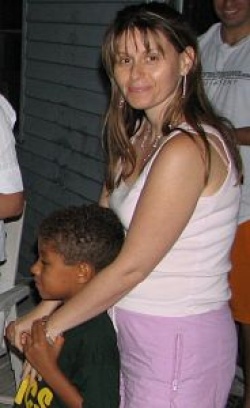 Slavka Naydenova and her son, Paul Wilson, in 2007. Family photo

The woman accused of killing Bulgarian native, Slavka Naydenova, and her 8-year-old son, Paul Wilson, in Dale City this week was fueled by jealousy, court documents state, as cited by local Virginia news website Inside NOVA.

Natalia Wilson, 47, is charged with two counts of first-degree murder in the deaths of Slavka Pavlova Naydenova, 41, and her son Paul Alexander Wilson, 8.

Naydenova is the sister of Bulgarian murky tycoon, founder and President of the Multigroup Corporation, Iliya Pavlov, who was gunned down in Sofia 7 years ago.

Naydenova and her son were stabbed to death in their home at 4501 Hanover Court in Dale City. Naydenova’s husband came home from work to find their bodies about 11 p.m. Monday, police said.

According to a criminal complaint on file in Prince William General District Court, Wilson “was jealous of her husband’s relationship with Slavka.”

The criminal complaint also states that Natalia Wilson lied to police during the investigation about where she was during the killings.

“Evidence collected revealed that Natalia was in fact in the area of Hanover Court during the time of the murders,” the court document states.

Wilson is due in Prince William General District Court on March 1 for a preliminary hearing.

Police are investigating whether Wilson was a mail-order bride, and if she is in the United States legally. She is being held without bond at the Prince William-Manassas regional jail.

A family friend in Bulgaria said Naydenova was a devoted mother who spent summers with her son in Bulgaria.

“She wanted Paul to maintain his Bulgarian language and heritage,” the friend said.

In the U.S., Naydenova ran a business from home as a real estate agent and landscaper so she could “be with her son when he needed her,” said the friend, who did not want her name used.

Paul was in second-grade at Mary G. Porter Traditional School in Woodbridge.

“She was a good, down to earth woman,” the friend said. “She has never harmed anyone. She and her son never deserved this.“