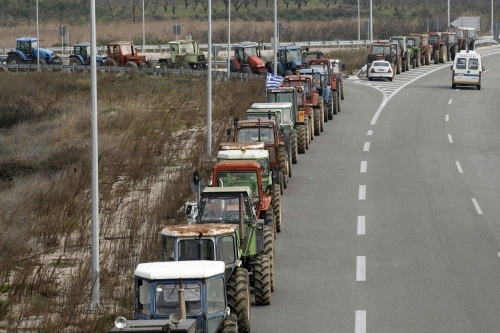 Farmers have already been protesting for weeks, demanding more government assistance by blocking the Bulgarian border. Photo by BGNES

Greek tax inspectors and customs officials have begun a strike in protest against government austerity measures, including wage cuts.

The measures have been introduced to try and tackle Greece's huge budget deficit and national debt, the BBC reported. The Customs Officials strike could stop all forms of transport to and from Greece.

The EU approved the plan on Wednesday, but insisted on inspecting Greece's notoriously unreliable accounts.

Greece's deficit is, at 12,7%, more than four times higher than eurozone rules allow. Its debt is about EUR 300 B.

Farmers have already been protesting for weeks, demanding more government assistance by blocking the Bulgarian border.

Civil servants are planning a strike next week and there is talk of a general strike later in the month.