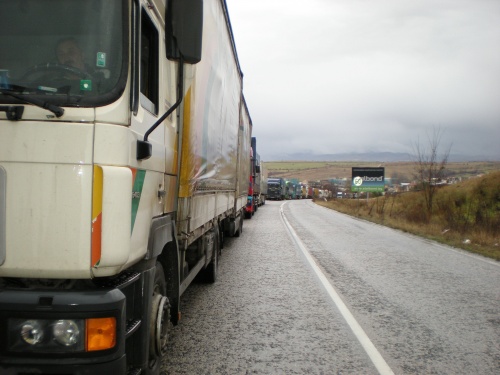 Truck drivers at Kulata cross border point between Bulgaria and Greece had to wait for 72 hours over the Greek farmers blockade. Photo by BGNES

All border crossing points, except Zlatograd, between Bulgaria and Greece are closed Thursday, the Bulgarian border police reports.

Kulata-Promahon, Ilinden-Eksohi and Capitan Petko Voyvoda-Ormenion are closed for all traffic. The road at Zlatograd is not accessible for tractor-trailers.

The blockade is in its 18th day and Bulgaria's Main Directorate “Border Police” informs they have been appraised by the Greek authorities that the protesting Greek farmers are not going to let any traffic through Kulata in the next 3 – 4 days.

Vehicles were let through the crossing point last during the night. Some of the truck drivers say they stood in line in the freezing cold for 72 hours.

The “Border Police” appeals to people who must travel to Greece to use the other check points because of shorter-lasting blockade periods.

Earlier Thursday, Greek farmers threatened to escalate their protests around Greece over the failed negotiations with the government.