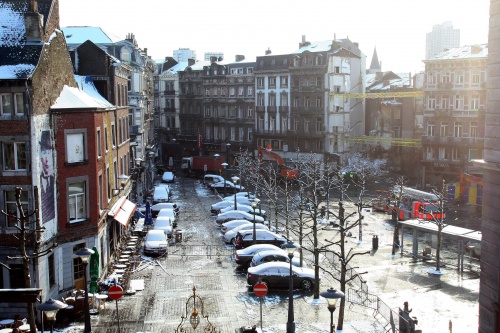 Mehmet Calik, the owner of the collapsed Liege builidng, denied rumors that the buildings housed illegal immigrants. Photo by BGNES

A woman from Bulgaria's village of Probuda, near the city of Targovishte, believes if Bulgarians have died in the building blast in Liege, Belgium, they are her relatives.

The woman told the Bulgarian National Television, BNT, that her husband, daughter and son were in Belgium as illegal immigrants working on supporting the family in Bulgaria and their whereabouts are currently unknown. She tried to reach them, but no one is answering their cell phones. According to her, the four shared a room in the collapsed Liege building, which was known to house illegal immigrants.

The village Mayor, Todor Tsankov, declined to confirm the information, saying he only heart rumors spreading around the village. According to the Mayor, “anything can be said and get twisted around in the Roma quarter of Probuda.”

The explosion happened on January 27 and reports about Bulgarian casualties have been quite contracting. It was reported first by Bulgaria's Deputy Foreign Minister, Marin Raikov, that 4 Bulgarians died in the collapse and 2 were injured. On Monday, however, the Foreign Ministry, disproved the previous reports, saying according to the Bulgarian Embassy in Brussels, no Bulgarians were killed by the explosion.