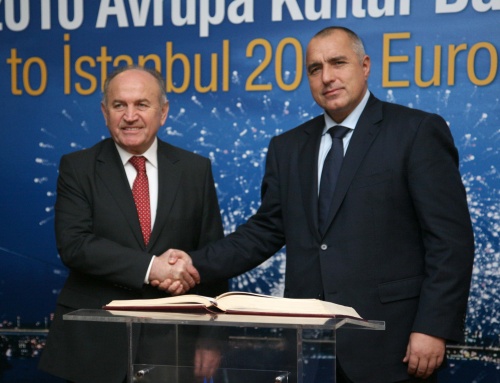 Bulgaria’s Prime Minister, Boyko Borisov, gave to the Mayor of Istanbul, Kadir Topba?, as gift a copy of the Gold Thracian Treasure.

The official ceremony took place Saturday. Borisov was accompanied by the Mayor of Sofia, Yordanka Fandakova, who presented her Turkish counterpart with the official symbol of Sofia. Topba? returned the honor by offering a copy of a Turkish treasure.

Bulgaria’s PM stated he will propose that the restored mosque in Bulgaria’s second largest city of Plovdiv known as “Dzhumaya” becomes an UNESCO historical heritage site. Turkey, on their part promised to do the same for the “St. Stefan” church in Istanbul, known as the Iron Church.

It was further reported during the meeting that Sofia will host the next round of the Bulgaria-Turkey talks aiming at resolving some thorny issues between the 2 countries. Deputy Foreign Minister, Marin Raykov, is the Chair of the Bulgarian delegation.

One of the goals of Borisov’s trip is the establishment of a more favorable atmosphere to find solutions for long-standing problems between Sofia and Ankara.

Borisov is on a two-day formal visit to Turkey. On Friday he met with Turkish President Abdullah Gul and PM, Recep Tayyip Erdogan.