Construction of 1st Bulgarian Skyscraper Kicks off in Sofia 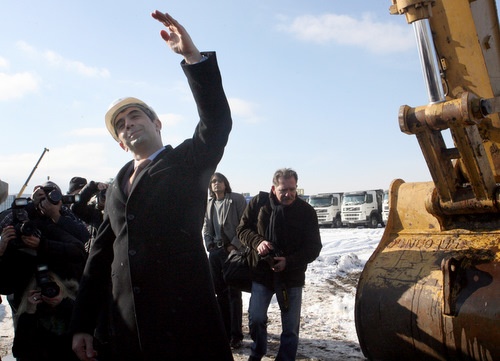 Bulgaria's Regional Development Minister Plevneliev shows how tall the Captain Ford Center will be during its ground-breaking ceremony. Photo by BGNES

The construction of a new business center described as the first Bulgarian skyscraper started in Sofia Friday with a ground-breaking ceremony attended by Regional Development Minister Rosen Plevneliev.

The project for “Captain Ford” Business Center is a joint work of the UK design studio Atkins – known for its skyscraper projects around the world including in Dubai – and of their Bulgarian colleagues from A&A Architects.

It will be realized by the construction company Fort Knox, which is owned by Russian businessman Stanislav Parhomenko, Bulgarian Georgi Ivanov, and the Ukrainian owned firm Variant Sofia.

The Captain Ford Business Center will be located on the Tsarigradsko Shose Blvd in the southeastern part of the Bulgarian capital, close to the Metro hypermarket.

The investment will be worth some EUR 60 M. The Captain Ford Business Center will include two buildings. One of them will be 126 meters – 36 floors – which makes it the tallest building not only in Bulgaria but also in the Balkans.

The business center is going to have an all-out built-up area of 75 000 square meters that will be occupied most by offices. The construction is expected to last at least two years.

“I bow to these foreign investors who in a moment of crisis start such a large-scale project in such a categorical way with belief not just in their own building which is world-class but also in the future and the market in Bulgaria,” Regional Development Minister Rosen Plevneliev said during the ground-breaking ceremony.