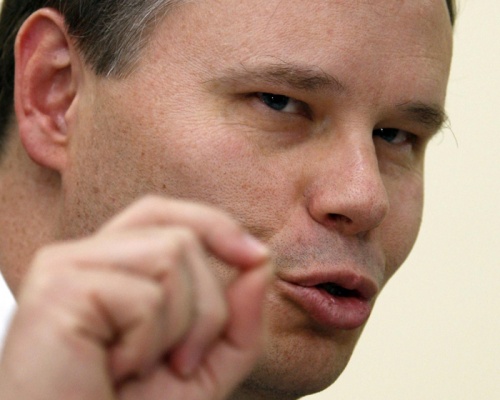 Jeffrey Franks, head of mission to Bulgaria and Romania, says the IMF, satisfied with Romania's progress on budget reforms, is now set to approve the next agreed instalment of its EUR 20 B aid package. Photo by BGNES

The International Monetary Fund (IMF) has reported that Romania's state budget has satisfied the conditions for it to release EUR 2,3 B - the third and fourth instalments of the EUR 20 B aid package, subject to the approval of an executive board meeting scheduled for mid-February.

"We have reached agreement at staff level... on the IMF-supported stand-by arrangement," said Jeffrey Franks, the IMF mission head for Romania and Bulgaria.

"Subject to approval of this agreement by fund management and, subsequently, by the executive board, the third and the fourth disbursements - EUR 800 M - would become available," Franks said on Wednesday.

Separately, the European Commission has said that Romania would qualify for a further EUR 1 B, the second instalment of its EUR 5 B share of the package managed by the IMF.

"I commend the Romanian authorities and the Romanian people for the efforts made during this global crisis to limit the deterioration of the budget deficit and to preserve macroeconomic stability," said Joaquín Almunia, European Commissioner for Economic and Monetary Affairs.

While noting that Romania is now on track with economic reforms, economists have cautioned that the new government will need to push through a series of painful reforms to access the remainder of the loan.