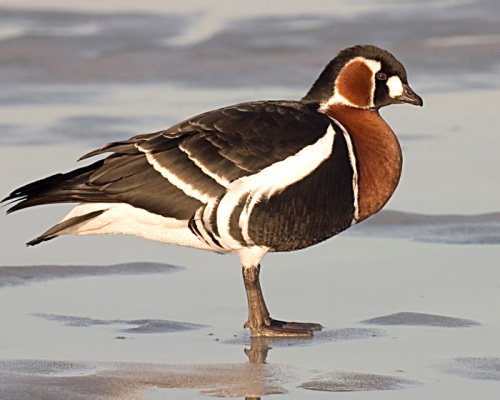 The rare and protected red-breasted goose is under threat from severe weather and poachers in the extreme north east coastal areas of Bulgaria. Photo by BGNES

The red-breasted goose, a globally threatened species, spends the winter at Lakes Shabla and Durankulak, along with the larger white-breasted goose.

The recent bad weather has trapped the birds, forcing them to seek food along roadsides and in nearby wheat fields.

The birds' state of starvation and exhaustion means they can be easily approached, making them extremely vulnerable.

"We are extremely worried by the increased pressure of hunting and the increasing incidences of poaching," commented Stoycho Stoychev, Director of Nature Conservation of the Bulgarian Society for the Protection of Birds.

Poachers have been taking advantage of the distressed birds. On a day when hunting was banned, representatives of the Bulgarian Society for the Protection of Birds and Le Balkan International Foundation counted 113 shots fired near Durankulak Lake.

Many wounded geese were subsequently found, despite the fact that they are a protected species and that Bulgaria’s Hunting Act prohibits the hunting of exhausted birds, even in the open season.

"We alerted the Executive Agency of Forestry, the Union of Hunters and Fishermen and the Regional Inspectorate of Environment and Water. We expect intensified inspections in the region of Shabla and Durankulak, prohibiting hunting of birds in distress and the shooting of protected species such as red-breasted goose. Our volunteers will also be in the region to look after the birds," Stoychev announced.