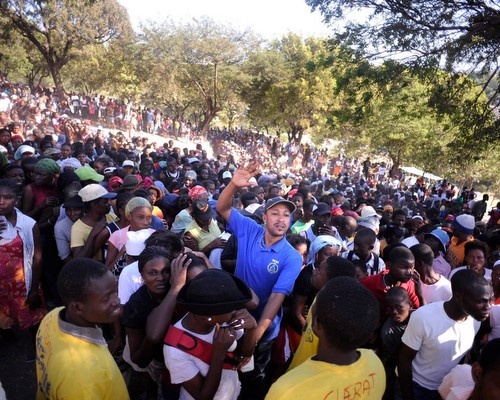 A security guard signals to his team as homeless Haitians waited in a chaotic line for food and water from the US 82nd Airborn Division in Port au Prince, Haiti 21 January 2010. Photo by EPA/BGNES

Haiti is planning to house 400,000 earthquake survivors in new tented villages outside the capital, Port-au-Prince, officials have announced.

Interior Minister Paul Antoine Bien-Aime said 100,000 people would initially be sent to 10 settlements near the suburb of Croix Des Bouquets.

He gave no timeframe, but said the moves would start as soon as possible.

An estimated 1.5 million people were left homeless by the 7.0-magnitude quake, which killed as many as 200,000.

At least 75,000 bodies have so far been buried in mass graves, the government has said. Many more remain uncollected in the streets.

At least 122 people have been saved by international search-and-rescue teams, according to the US government, but hopes are now fading that anyone will be found alive underneath the rubble.

A Florida-based team is reported to have left, along with others from Belgium, Luxembourg and the UK.

"You have to be realistic and after nine days, reality says it is more difficult to find people alive. But it's not impossible," said Chilean Army Major Rodrigo Vasquez at the site of the collapsed Montana Hotel.