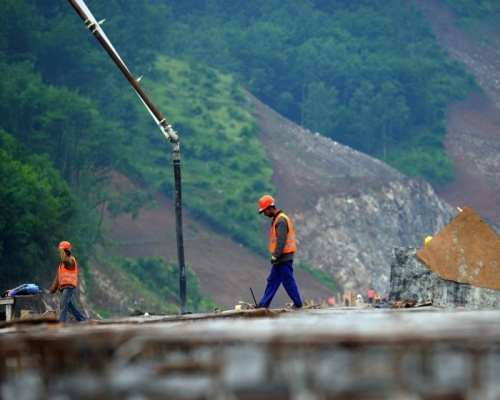 Boijadar Yotov, head of the Bulgarian Road Agency, expects to finalise the schedule and additional financing of the Lyulin Highway project within two weeks. Photo by BGNES

The Bulgarian Road Agency will sign an annex to the Lyulin Highway contract with Turkish company Mapa Cengiz, following their request for additional funds for the motorway construction project.

Bojidar Yotov, Chairman of the Board of Directors of the Road Agency has made this announcement on Thursday. Currently, the agency, which has the status of contractor together with the engineer on the project, is examining the claims made by Mapa Cengiz.

The Turkish consortium has submitted a schedule for completion of the delayed project, according to which they claim the highway will be completed by December 21, 2010.

Yotov added that verifying the validity of the case would clarify the additional costs contained in the submission.

A total of 38 complaints have been presented by the contractor, said the head of the road agency. Of these, only two have until now been accepted as reasonable. The additional funding required to satisfy these objections amounts to some BGN 7 M.

Mapa Cengiz has requested these additional funds citing changes in geological surveys of the terrain and the relocation of the engineering networks, factors they claim delayed implementation of construction work.

The road agency has its own counter claims directed towards Mapa Cengiz. If the company fails to comply with the schedule, it will be charged penalties, said Bojidar Yotov.

Their amount is still to be specified but will be included in the completed annex to the motorway contract, he concluded.

A proposal put forward earlier in January by the Bulgarian Branch Chamber "Roads" to take over the contract was turned down by Rosen Plevneliev, the Regional Development Minister, on the grounds that such an action would result in the loss of European funding for the project.