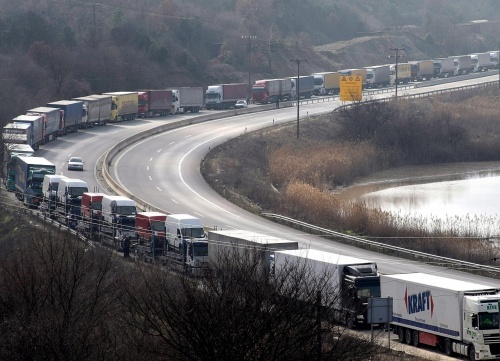 Hundreds of trucks wait in line to pass the Promahon border station in Greece to Bulgaria on 29 January 2009 as Greek farmers blocked the border with their tractors protesting the government's farm policy. Photo by EPA/BGNES

Local tourist companies have reported a huge drop in tourist numbers in Bulgaria’s main winter resorts over the blockade by Greek farmers of the Bulgaria-Greece border.

Sandanski, Bansko ans the entire South-West region of Bulgaria have reported a drop in tourists since last week when the first rumors of a possible blockade of the Bulgarian-Greek border came out in the local media.

Since last week, Greek tour operators have begun to refuse reservations at Bulgarian hotels, as Greek tourists have no certainty that they will be able to cross the border into Bulgaria.

”The situation is very bad. Millions of euros are being lost - not only in Sandanski, but in Bansko and the whole region, “ local tourist officials reported.

Bulgaria Prime Minister, Boyko Borisov, earlier Tuesday requested EUR 10 M from the European Union for the ongoing blockade of the Bulgaria-Greek border by Greek farmers, who started to block the Bulgarian border for ten days from Monday as they rally against unpaid subsidies and low prices for their production.