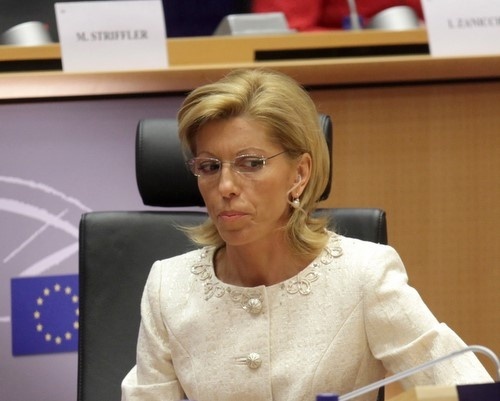 Rumiana Jeleva decided her fate on her own by withdrawing her candidature for European Commissioner and leaving the office of foreign minister. Photo by BGNES

Bulgarian commissioner-designate Rumiana Jeleva has withdrawn her candidature and resigned as foreign minister after pressure for her removal mounted both on the European and home front.

Jeleva took the decision even though the office of legal affairs accepted her documentation as being truthful and accurate, finding no wrongdoing on her end.

Just two hours before the news broke, MEPs on the development committee held a meeting to decide Jeleva's fate after the political coordinators of the committee failed to reach a joint position Monday night.

The centre-right European People's Party, the largest group within the legislature, continued to back Jeleva. But a coalition of Socialists, Liberals and Greens remained opposed, questioning her professional skills and knowledge about the dossier she would be in charge of - humanitarian aid.

Representatives of the European People’s Party, which has stood firmly behind Jeleva, who is one of its Deputy Chairs, turned out to be rather isolated in their efforts to back her, holding just ten out of thirty seats in the committee.

The Bulgarian EC-Designate Jeleva is the only one of all EU Commissioner-Designates who have had their hearings so far, whose fate was to be decided with a general vote of the respective EP Committee.

The confirmation hearing for the incoming European Commission last Tuesday descended into disarray as Bulgaria’s foreign minister struggled to face down claims that she was less than frank in declarations about her business affairs.

Jeleva, who has been subject to extensive speculation concerning alleged conflict of interests and allegations of being the weakest link in the new EU executives, who may block the appointment of the entire college, failed to come clean due to vague answers and lack of additional evidence to back her claims.

The German paper Die Welt recently published an article asking if Bulgaria’s Foreign Minister and EU Commissioner Designate Rumiana Jeleva was a “gangster’s bride for the EU”. The article cited anonymous rumors that Jeleva’s husband, banker Krasimir Jelev, had been involved with the Russian mafia along the Black Sea coast, and that he had worked for the murky business group TIM. Until the summer of 2009 Jelev had been the head of the Central Cooperative Bank branch in Burgas.

Although her husband’s business dealings have come under scrutiny in the Bulgarian and German press, the European parliament also questioned whether Jeleva herself did enough to halt her own business interests when she became MEP and consequently foreign minister.

The EP Development Committee put off its decision on Jeleva on January 12, 2010, in order to request the position of EC President Barroso, and of the EP Legal Service over the issues surrounding Jeleva.

At the end of last week European Commission President Jose Manuel Barroso backed Bulgaria's embattled European Commissioner candidate despite the risk of voting out the entire EU executive. The tenor of his endorsement however was not very strong. He said Jeleva had the “necessary general competence” and international experience for the job and showed the “necessary levels of European commitment”.

Earlier Monday night, the position of the EP Legal Service said that Jeleva did not technically violate the Code of Conduct of the EC with her declaration but that a possible discrepancy in her declarations when she was a MEP in 2007-2009 could arise. Yet, the Legal Service made it clear it could not verify the truth of the information she has submitted, and that EC President must scrutinize that.