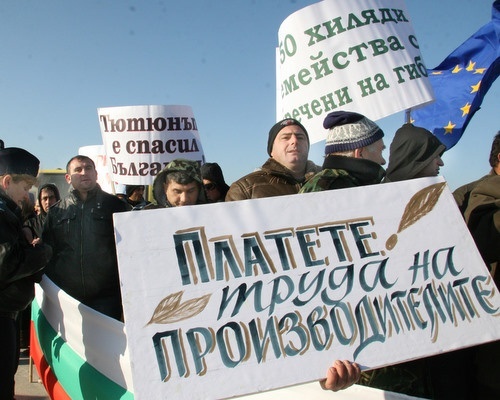 Flashback to the vocal protests of tobacco growers in December. The slogan reads: "Tobacco has saved Bulgaria". Photo by BGNES

The European Commission has authorized the payment of BGN 116 M to Bulgaria's tobacco producers for the 2009 crop.

Minister of Agriculture Miroslav Naidenov made the announcement on Sunday at an impromptu press conference at Sofia airport on his return from Berlin.

Naidenov added that he had received the news late on Saturday night in a letter from Jean-Luc Demarty, EC General Director of Agriculture and Rural Development.

Naydenov had already spoken to Prime Minister Boyko Borisov and Finance Minister Simeon Djankov. They have committed themselves to distributing the funds as soon as possible.

According to the Agriculture Minister, the funds will probably be paid during the first quarter of 2010, or at the latest in the second quarter. It should become clear exactly how the subsidies will be allocated, following a meting on Thursday of the Board of Directors of the Tobacco Fund.

On December 22, 2009, following days of protests by the tobacco growers, Miroslav Naidenov, Minister of Agriculture, had promised that he would urgently request the payment of BGN 116 M in tobacco premiums.