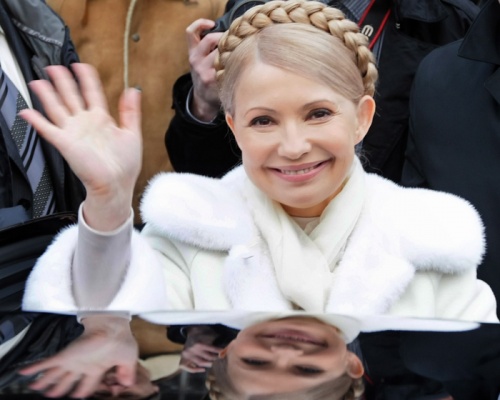 Prime Minister, Yulia Tymoshenko, waves to the media after voting in the Ukrainian presidential election on Sunday. Photo by BGNES

Ukrainians are voting Sunday in presidential elections, the first since 2004, when the so-called Orange Revolution occurred.

Political analysts say that, five years later, the electorate is disillusioned. There is a widespread perception that the promises made five years ago – tackling corruption and enhancing links with the European Union – have failed to materialize.

Polling stations opened at 08:00 am Ukrainian time and are scheduled to close 12 hours later. Some 36,5 M Ukrainians are eligible to vote. Exit polls are expected soon after that time.

There are 18 presidential candidates, but, of these, only three are viewed as serious contenders. The pre-poll favorite was Viktor Yanukovych, former Prime Minister, whose initially apparent victory in 2004 was annulled amid allegations of vote-rigging.

His prime competitor is the current Prime Minister, Yulia Tymoshenko. The incumbent, Viktor Yushchenko, is expected to trail in third position.

If, as predicted, no candidate exceeds the 50% vote required, a run-off vote will be required. This is scheduled for February 7.

In an effort to ensure a credible election, the Organization for Security and Cooperation in Europe (OSCE) has some 600 observers in place at polling stations nationwide. There are also thousands of other foreign observers in attendance.