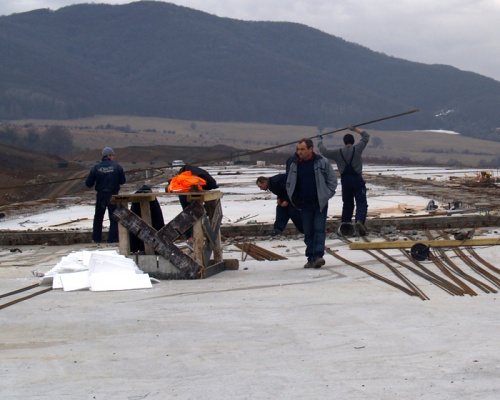 Bulgarian Chamber "Roads" has demanded the replacement of Turkish contractor Mapa Cengiz by a consortium of Bulgarian construction companies, to complete the much-delayed Lyulin Highway project on time. Photo by BGNES

The Bulgarian Branch Chamber "Roads" has made this demand in a letter to Prime Minister Boyko Borisov, distributed on Friday.

From 2006 until now, only 40% of the construction has been completed, and the highway must be built by the end of 2010, the letter reads.

"We suggest that you remove them [Mapa Cengiz] immediately, according to Article 15 of the contract. Let our country entrust us with the task of organizing a consortium of Bulgarian road companies to complete the site qualitatively and within a reasonable time," the letter said.

President of the Chamber Rumen Yovchev explained that clauses in the contract allow for the Turkish consortium to be removed and the contractor to retain the bank guarantee.

"It is possible for the highway to be completed by the end of 2010, if we start work immediately. Companies Mostroy, Glavbolgarstroy and Patstroy 92 may participate in the consortium and we may invite Patinvestengineering," said Yovchev.

The highway is being built with funds from the European Union ISPA program. If there to be a failure to comply with deadlines, Bulgaria would have to return the acquired funds and to complete the highway with money from the budget.

The Bulgarian Transport Ministry has also expressed its concerns that that the target deadline date will not be met because ten times fewer than the necessary workforce is being employed on the site, as confirmed by a recent official snap inspection of the site.

On Tuesday, Prime Minister Boyko Borisov had requested Mapa Cengiz to submit a schedule for the construction of the highway and commit to a specific deadline.

The Bugarian companies stated that the redesign of the bridges and tunnels at the request of the contractee were the reasons for the delays.