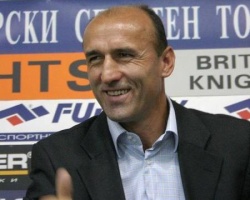 "I've tried to terminate the contract but it didn't happen," Jesic commented for local media. Photo by actualno.com

Serbian Miodrag Jesic, who was tipped to replace Luboslav Penev as CSKA Sofia coach, has said he will stay in his present job with Libyan side Al-Ittihad.

"I've tried to terminate the contract but it didn't happen," Jesic commented for local media.

In his words he wanted very much to come to Bulgaria and win the title with CSKA but he is forced to stay in Libya.

CSKA Sofia coach Lyuboslav Penev resigned from his post on Wednesday along with the whole coaching staff of the top Bulgarian club.

Lyoboslav Penev's time in charge of CSKA was tainted with controversy including a travel ban over his default BGN 2 M loan from EIBank.

Penev was appointed CSKA Sofia coach in the spring of 2009 after replacing his legendary uncle Dimitar Penev.