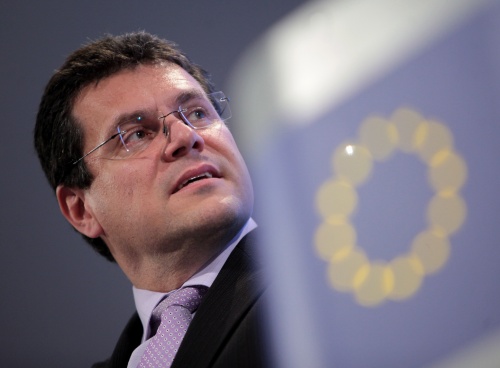 Commissioner-designate from Slovakia, Maro? ?ef?ovi?, faces tough grilling from EPP during his hearing over past remarks against his country's Roma population. Photo by BGNES

Put in a difficult position by Rumiana Jeleva's weak performance at her parliamentary hearing earlier this week, the centre-right European People's Party (EPP) is threatening to counter-attack by asking for a socialist head to roll.

The EPP group said on Wednesday (13 January) that it would seek an explanation for a statement made by Slovakia's Commissioner-designate Maroš Šef?ovi? against his country's Roma minority back in 2005.

"We are very worried about the statement of Mr. Maroš Šef?ovi?, which he made on 19 January 2005, when the Commission organised a conference on human rights and EU migration policies," said József Szájer, a Hungarian MEP responsible for overseeing the commissioners' parliamentary hearings at the EPP.

During that meeting, Šef?ovi? expressed the view that his Roma compatriots were exploiters of the Slovak welfare system, Szájer told journalists in Brussels.

"I don't think that the future vice-president of the European Commission, responsible for such sensitive issues as recruitment, as equal opportunities, as gender, can have such discriminatory views on this," the EPP representative stated, adding it was unacceptable to label any ethnic group on the basis of collective guilt.

Maroš Šef?ovi?, a socialist from Slovakia, is currently education commissioner and has been nominated vice-president responsible for inter-institutional relations and administration in the Barroso II team (2009-2014).

But Szájer warned the Slovak would have a rough ride when he appears in Parliament next week. "At the hearing on Monday, we will be very interested to hear what Mr. Šef?ovi?'s view is on this question, what he can answer, and we are also interested in the view of the Commission president, and whether such persons can be members of his cabinet, at a level as high as vice-president," Szájer said.

Asked by EurActiv if the move was a tit-for-tat response to the socialists, who called for Bulgarian commissioner-designate Rumiana Jeleva to be ousted following her poor performance on Tuesday, Szájer admitted that "there could be a false impression" in that sense.

Indeed, Szájer's views appear to contradict previous EPP statements saying it was against personal attacks or "manhunts". According to Parliament insiders, the EPP had kept Šef?ovi?'s quote "in the freezer" for when the centre-right found itself in a bad position.

However, the accusations against Šef?ovi? do not appear to be based on solid grounds. In fact, EurActiv discovered that the quote was not taken from an official OSCE document, but an 11-page presentationPdf external by a Roma activist, who accuses many European leaders of "anti-Gypsyism", including several EPP personalities, such as Romanian President Traian Basescu, former EPP-affiliated Slovak Prime Minister Mikulas Dzurinda, a high-profile MEP from the German Christian Democrat party, Doris Pack, and others.

The Parliament's development committee, which conducted Jeleva's hearing, has already concluded that the Bulgarian failed to answer MEPs' questions, according to an internal document seen by Dnevnik, EurActiv's partner in Bulgaria.

The assessment also notes that Jeleva had no concrete ideas about hotspots such as Afghanistan, Congo, Sudan and Gaza, and "apparently doesn't know where some conflict zones are located".

EPP representative Szájer said he had no knowledge of any such assessment, adding that his group hoped that Jeleva's assessment would include "not only unfounded allegations, but her expertise and her readiness to master this area".

"In normal circumstances she should have shown her competence, but she did not get fair treatment," Szájer said.

Commissioner-designate Maroš Šef?ovi?, nominated vice-president responsible for inter-institutional relations and administration in the Barroso II team, has already responded to the accusations, the Czech press reported late on Wednesday.

Sefcovic told Czech agency ?TK that the conference took place five years ago and he no longer remembers what he said at the time. If he made comments that some could find offensive, then he "deeply regrets it," it was reported.

"I have always backed any efforts to help the Romany community," Šef?ovi? is quoted as saying, adding that he had personally helped to create a special European system of subsidies from which 200 million euros are to aid Roma in Slovakia.

Czech agency ?TK adds that its sources said that the EPP expects it to try to seek a balance of forces and reject a socialist candidate. Socialist MEPs have practically rejected two commission nominees tied to the EPP, Bulgarian candidate Rumiana Jeleva and the Lithianian one, Algirdas Šemeta, the agency adds.