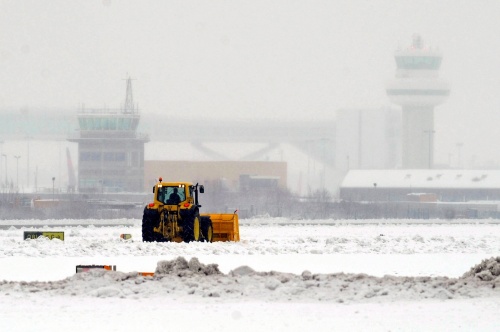 Snow ploughs struggle in vain to clear runways at Gatwick Airport in Southern Britain, 06 January 2010, as snow keeps falling and thwarting their efforts, the airport was closed until further notice. Photo by BGNES

Temperatures as low as -22C have left 122 dead in Poland and the main river, the Vistula, has frozen over, causing fears of flooding.

In the UK, thousands of schools are closed and travellers have been hit by major delays after heavy snowfall hit large parts of the country.

Western France has issued a weather alert for 14 regions, the BBC reported.

Extreme or severe weather warnings are still in place across the UK, which is in the grip of its longest cold snap for almost 30 years.

Hospitals across the country have implemented major incident plans to deal with the weather.

On Tuesday up to 20cm (8in) of snow fell in parts of Scotland and northern England, causing travel chaos for millions of people.

Another 40cm (16in) has been forecast in some areas as the snowfalls spread from north to south.