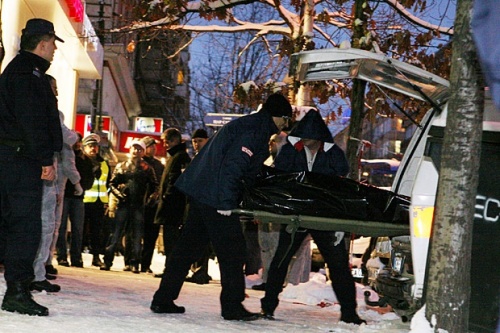 The body of controversial journalist, Bobi Tsankov, remained in the entrance of the roofed market where he was killed for more than 5 hours over the needs of the investigation. Photo by Sofia Photo Agency

Bulgaria’s authorities are working on three leads in their attempt to solve the murder case of controversial journalist, Bobi Tsankov.

The information was reported by Sofia City Prosecutor, Nikolay Kokinov.

Tsankov was gunned down in broad daylight in a busy district in downtown Sofia Tuesday. He was known by his alleged ties with crime bosses and began lately writing stories about them. His book The Secrets of the Mobsters was published last November.

The Sofia special police task force arrested Tuesday evening Stefan Bonev, aka “Sako” and two other alleged top crime bosses - Krasimir Marinov and Nikolay Marinov, aka the Marguin Brothers. The authorities confirmed the information about the arrests, but declined to say they were connected to Tsankov’s murder.

In November 2009, Sako chased Bobi Tsankov by car in Sofia issuing death threats against him.

Kokinov says eyewitnesses have seen two or three assailants and their number remains unconfirmed. 15 bullet shells from a 9-mm gun were found on the crime scene. Tsankov was shot point-blank in the head.

The Prosecutor declined to comment on what Tsankov and the two men, who were accompanying him, and who sustained non-life-threatening injuries, were doing in the building on the “Stamboliiski” boulevard in downtown Sofia, but confirmed there is a lawyer’s office inside and the three were, most likely, on a private visit.

Various Bulgarian media reported earlier that the office is the one of prominent attorney, Lachezar Takov, known as the lawyer of alleged top criminal, Zlatomir Ivanov aka Baretata (The Barret), who is linked to organized crime, two murders for hire and three attempted murders. It was also reported that Takov had insisted that Tsankov takes the witness stand in Baretata’s trial to which he agreed. During the trial, the journalist told the magistrates Baretata was an honest businessman. The SUV, parked at the crime scene,  also belongs to Baretata, according to reports.

The two men, accompanying the victim, worked in a security firm, once again tied to Baretata as reported by Martin Radoslavov, Editor-in-Chief of the popular weekly tabloid “Weekend”, where Bobi Tsankov published most of his investigations.

The authorities declined confirming the above alleged connections along with the identities of the two men or even the fact that they have been Tsankov’s bodyguards, but said one of them, with the nickname Kutsia (The Lame), had a 30-year-old criminal record.

The body of the victim remained in the entrance of the roofed market where he was killed for more than 5 hours over the needs of the investigation and was removed at 5:30 pm.

In connection with the case, an emergency meeting was called in the office of Chief Prosecutor, Boris Velchev, attended by the Interior Minister, Tsvetan Tsvetanov, Kokinov, the Director of Sofia’s Police Directorate, and other high-ranking police officers. As of 8 pm it was reported the meeting was still going on.