Who Is Who: Murdered Bulgarian Journalist Bobi Tsankov 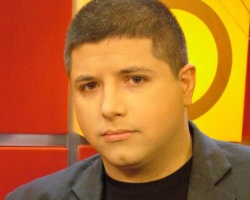 30-year-old Bobi Tsankov was murdered in broad daylight in Sofia on January 5, 2010.

Boris Nikolov Tsankov, aka Bobi Tsankov, was murdered in broad daylight in downtown Sofia on January 5, 2010.

He first became famous as a controversial figure when he was first arrested on June 24, 2003.

The signal against him was submitted by businesswoman Vanya Chervenkova. Tsankov was allegedly linked to the attempted murder on 35-year-old Vanya Chervenkova that filed a claim against him. Chervenkova has brought a lawsuit against Tsankov, claiming that she had paid the radio anchor some BGN 50 000 for advertising on Radio Viva. However, Tsankov never broadcasted any ads of Chervenkova's mineral water brand.

In June 2003, the Deputy Sofia Prosecutor, Petar Chalamov, said that the arrested radio host was charged with large-scale fraud as over 1 000 people from around Bulgaria had filed suits against him. In August 2003, Tsankov was released on a BGN 25 000 bail.

According to media reports, Tsankov committed fraud in several ways. One was to announce people could win free advertising in his show but then asked them to pay the amount of the value-added tax where he kept the money without broadcasting any ads. Another way was to ask the potential advertisers for money for billboards in Sofia which also never came up. A third way was to ask those who were said to have won free advertising to pay half of the amount of the ad to distribute the money among the owners and sponsors of the radio. He is said to have taken sums ranging from BGN 3 000 to BGN 17 000.

In November 2003, a bomb went off in a building in the centre of Sofia at the Neofit Rilski and Tsar Asen Str. The bomb was placed in front of the apartment of the parents of the controversial radio anchor Bobi Tsankov. The family of Tsankov was home during the blast but no one was injured.

The blast spurred rumors that Tsankov was a close associate of Sofia drugs boss Anton Miltenov, aka The Beak, and that the explosion was actually directed against him.

Tsankov was arrested again on June 3, 2004, for interrogation over his connections with Miltenov. A day earlier, he was injured in an evident attempt on his life when a hand-made bomb exploded in front of his home.

In 2004, Bobi Tsankov was involved in a scandal with the National Security Service (NSO) when it became clear that he had been guarded by an acting officer of the NSO. This led to the resignation of the former NSO Director, General Dimitar Vladimirov.

On February 27, 2006, Tsankov was arrested again over numerous frauds. His home at Tsar Asen Street where he lived with his parents was searched and he was interrogated by the Economic Police Unit.

On March 2, 2006, he was left behind bars by the Sofia District Court. Businesswoman Vanya Chervenkova was the main witness against him.

On June 27, 2006, he got a suspended three-year sentence with a five-year trial period over frauds during his time as host at the Viva Radio.

A second investigation against Tsankov is ongoing. He is investigated for misappropriation of property while he was the Executive Director of the 7 Days Radio in 2001.

In November 2009, Bulgarian Police arrested drugs kingpin ‘Jacket’ (Sako) in Sofia after he chased former radio host Bobi Tsankov through the streets of the capital in his car. ‘Jacket’ is also reported to have made previous threats against Tsankov’s life. Tsankov called the police while being chased.

Tsankov said that he had been chased in his car from the South Park in Sofia to the traffic lights in the City Center from where he managed to escape. He alleged ‘Sako’ was attempting to stop him writing about another famous mafia boss Metodi Metodiev a.k.a. Meto Ilienski being alive when he was thought by the authorities to be dead.

At the very end of 2009 New Bulgarian Media Group owned by media tycoon Irena Krasteva, who is the publisher of the Weekend paper, published Tsankov’s book in which he claims that Sofia drugs boss Metodi Metodiev, aka Meto Ilienski was still alive even though he disappeared in November 2003, and that he had become an agent of the US Drug Enforcement Agency DEA.