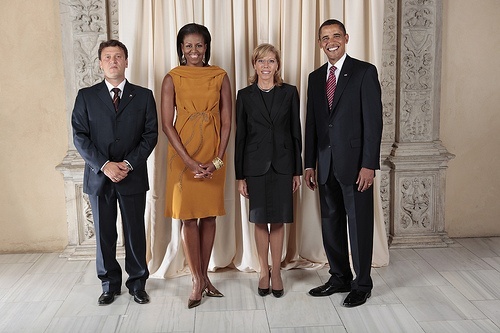 Jeleva (third L-R) and her husband Krasimir Jelev (first L) together with the Obama family during a reception at the Metropolitan Museum in New York, September 2009. Official White House photo

Bulgaria’s Foreign Minister and EU Commissioner-Designate Rumiana Jeleva has vowed to sue the German paper Die Welt over an article describing her as the wife of a gangster.

The article (available HERE in German) entitled “A Gangster Bride for the EU Commission?” talks about rumors that Jeleva’s husband Krasimir Jelev had dealings with the Russian mafia and worked at the Central Cooperative Bank owned by the Varna-based corporation TIM, which is accused of crimes for which no evidence have been provided. The article refers to rumors describing Jeleva as incompetent and spiteful.

“The journalist of Die Welt has made various comments on my personality not just as a woman but as a Bulgarian Foreign Minister, and has made insinuations regarding the affiliation of my husband with organized crime and the Russian mafia. There is proliferation of libelous claims and offenses, and this is punishable under German law,” Jeleva has told the 24 Chasa Daily.

“The article in question is one more element of the malicious campaign against my running for EU Commissioner, in which, unfortunately, Bulgarian MEPs are also participating actively, and so do high-ranking politicians from the Bulgarian Socialist Party,” said Jeleva, who is a representative of the ruling GERB party.

Bulgaria’s Foreign Minister states she expects the intensification of the malicious campaign against her as the hearing at the EP on January 12, 2010, to confirm her as EU Commissioner is coming closer.

Her husband, Krasimir Jelev, is convinced that someone is starting anti-Bulgarian rumors, and that the Bulgarian Socialist Party has bad advisers.

“Black PR could be successful if there are any facts in its support. In the opposite case, it usually turns against whoever is doing it,” he is quoted as saying.

Krasimir Jelev was the head of the Burgas branch of the Biochim Bank from 1996 till 2003. From 2003 until August 2009 he was the director of the Central Cooperative Bank branch in Burgas. According to the 24 Chasa Daily, he is currently only a member of the board of the Water Supply and Sewerage utility in Burgas.