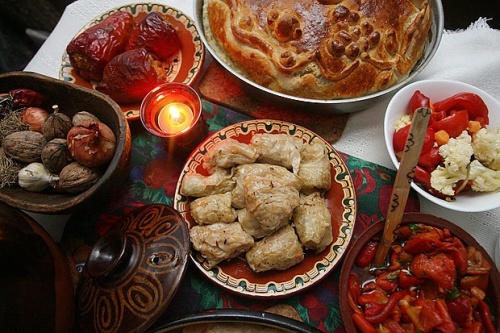 The symbolic Christmas Eve meal in Bulgaria is the last vegan meal of the fasting during the 40 days of Advent. Photo by Sofia Photo Agency

Bulgaria joins Friday Christians around the world in commemorating the birth of Jesus Christ.

According to the Gospel of Luke, Mary learns from the angel Gabriel that she will conceive and bear a child called Jesus. When she asks how this can be, since she is a virgin, he tells her that the Holy Spirit would "come upon her" and that "nothing will be impossible with God".

At the time that Mary is due to give birth, she and her husband Joseph travel from their home in Nazareth to Joseph's ancestral home in Bethlehem to register in the census of Quirinius. Because they were not able to find a room in the inn, when Mary gives birth to Jesus she places the newborn in a manger.

An angel of the Lord visits the shepherds guarding their flocks in nearby fields and brings them "good news of great joy". The angel tells them they will find a child wrapped in bands of cloth and lying in a manger. The shepherds hurry to the manger in Bethlehem where they find Jesus with Mary and Joseph. They repeat what they have been told by the angel, and then return to their flocks.

In Bulgaria, the celebration begins in the evening of December the 24th – Christmas Eve, known as "Badni Vecher." It is one of the most honored family holidays when relatives gather together in expecting the birth of Jesus.

The symbolic Christmas Eve meal is the last vegan meal of the fasting during the 40 days of Advent. Regional Christmas traditions in Bulgaria vary slightly, but in many parts of Bulgaria, a piece of silver is inserted into a loaf of bread. This may also be done with a kolak, or ring-shaped cake, that is an almost essential part of the Christmas season. Good fortune is said to come to the person who finds the piece of silver.

The meal includes an odd number of dishes – 7, 9 or 11. The tradition says that the greater the number the better and fertile the next year will be. Traditional food includes peppers stuffed with rice, lentil, beans, baked pumpkin.

In addition, a common belief in Bulgaria is that Mary bore Christ on Christmas Eve, but only announced the birth the following day, on Christmas (which is celebrated December 25th). Folk tradition follows this belief – new mothers announce the birth of a new child to the world the day following the birth.

Christmas in Bulgaria, called Koleda begins at midnight on the 24th with Koleduvane. This an annual ritual koledar where young men go door to door to spread Christmas cheer around the village by dressing in costumes and singing songs. People give them gifts such as food and money.

The Christmas holidays end on the Day of St. Stephan, on December 27.