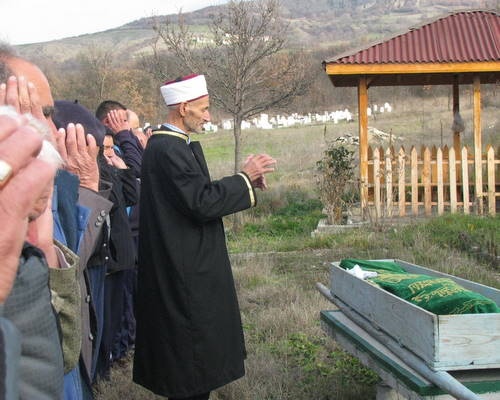 The three children, who were killed in the deadly blast at an orphanage in the southern town of Krumovgrad, were buried on December 7 in line with Muslim rituals. Photo by BGNES

The main suspect for the deadly blast at an orphanage in the southern town of Krumovgrad has committed suicide two weeks after the tragedy, which killed three children.

Hamdi Ali, 54, operated the local heating utility at the orphanage. He is said to have been a close friend of the children and is believed to have given them a detonator from a military mine by mistake.

This is the second time that Ali attempts to take his own life after one day after the tragedy he stabbed himself in the stomach with a knife and was hospitalized. He was released a week ago on a bail of BGN 500.

The body of the dead man was found by his wife Tuesday afternoon in the ceiling of their house.

The fatal explosion occurred on December 5. One of the boys died on the scene while the other has been taken to the Krumovgrad hospital where he later died. A third boy was listed in critical condition in the hospital in the regional center – the city of Kardzhali, and died during surgery.

The victims Dzhingiz Rushen (13), and Sunay Keazim (16) are from the nearby villages of Pelin and Zimornitsa, while the third killed boy Dzhingiz Dzhemal (15) was born in the village of Sokolinovo, close to the southern border town of Momchilgrad.

The orphanage did not have security guards, which according to the mayor is a wide-spread practice, aiming to provide more serene environment for the children in the institution.

Krumovgrad is a small, dilapidated and impoverished town, located close to the border with Greece. The border region is known to have been once strewn with mines and many of them are still buried in the ground.