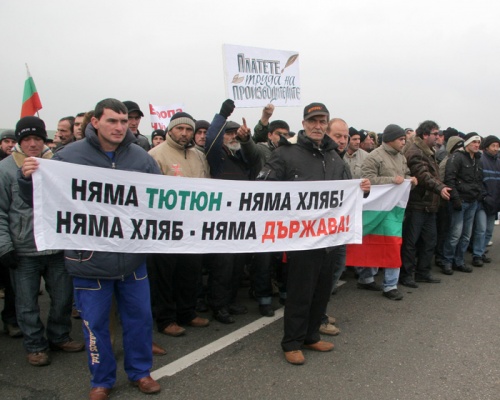 The bulgarian government and the protesting tobacco workers have come to an agreement over subsidies, and all organized protests are to be ended. Photo by BGNES

The Bulgarian government and the protesting tobacco growers have reached an agreement, and the protests will stop, following a meeting of the Council of Ministers and the Prime Minister.

Miroslav Naydenov, Minister of Agriculture, has announced on Tuesday that, he will request that payment of BGN 116 M in premiums to Bulgarian tobacco producers should be authorized for the 2009 crop, at the first meeting of the Council of Ministers of Agriculture on January 17, 2010.

By doing this, Bulgaria will request the opportunity to provide a one-off provision of state aid to the tobacco producers.

This special request must be made because, as of 2010, sector subsidies in the EU will be ended. The premiums should be paid in 2009, but funds for this have not been allocated in the state budget.

Bulgaria has the right to grant BGN 116 M per year to assist its tobacco growers by permission of the European Union. In the spring of this year BGN 108 M had already been allocated.

On March 29, 2010 at the earliest, a definitive decision will be taken by the Council of Ministers on Agriculture of the EU.

"We hope that they will say okay and it will work, because such aid has been requested by other countries too. So let's hope that the aid will be authorized, and the moment we receive permission, we will begin to pay," the Minister explained.

According to Naydenov, the money will be found. "We will ask [Finance] Minister Dyankov," he said.

"As of April 2010, it is likely the state can find funds – maybe, for example, temporarily from the Agriculture State Fund. Then, all EUR 116 M will be paid, assuming there is a positive response from the European Council," he explained.