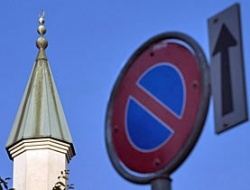 An appeal is lodged at the European Court of Human Rights against the Swiss ban on minaret construction. Photo by swissinfo.ch

An appeal against the recent Swiss referendum decision to ban the construction of minarets, has been lodged with the European Court of Human Rights.

Hafid Ouardiri, and Algerian-born Muslim and former spokesperson for the Geneva Mosque wants the court to rule that the ban breaches the European Convention on Human Rights.

In November, 57,5% of the Swiss electorate voted in favor of the ban on future construction of minarets in a referendum put forward by the Swiss People’s party.

The Swiss federal government had urged voters to reject the ban, warning it would contravene human rights and religious freedom. International condemnation followed the referendum result.

The Strasbourg court will now determine whether the complaint is “formally receivable” – this process could take up to 18 months. If the request is ruled admissible, it could be several years before a ruling is made.