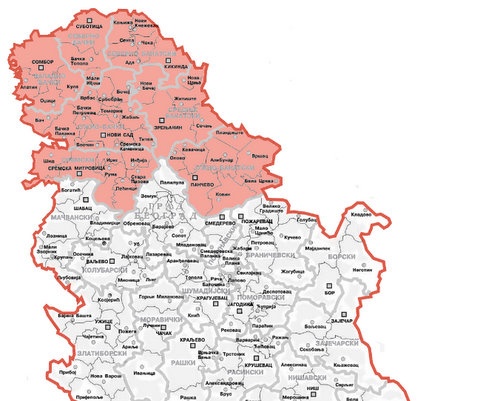 Northern Serbian province of Vojvodina has gained back its autonomy from before 1990. Map by Wikipedia

The Parliament of the northern Serbian district of Vojvodina approved Monday the new statutes of the province providing for a greater autonomy.

The document was supported by 86 out of 120 delegates in the Vojvodina assembly but was boycotted by the members of the Serbian Radical Party and the Serbian Progressive Party who believe that the greater autonomy might lead to the break off of Vojvodina.

The draft statutes were already approved in November by the Serbian Parliament. With the new document Vojvodina has practically regained the wide autonomy status it enjoyed before 1990 when Serbian dictator Slobodan Milosevic stripped off both Vojvodina and Kosovo of their privileged status leading the Kosovo Albanians to rebel.

“The provisions of the statutes provide the instruments for free economic development and preserve the identity of the national communities as well as the decentralization and democratization of Serbia,” said the Speaker of the Assembly of Vojvodina, Sandor Egeresi.

According to its new statutes, Vojvodina will be able to sign treaties with other provinces abroad though not with states.

Increasing the autonomy of Vojvodina has been met with some resistance in the Serbian society over secessionist fears.