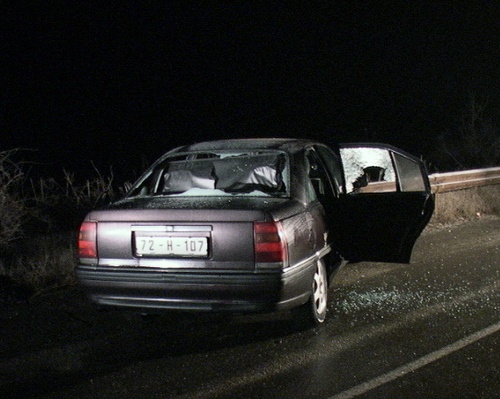 The gangsters stopped the car of the Turkish national, an Audi Q 5, disguised as policemen. Photo by Interior Ministry

One man has been killed Sunday night in a shoot-out between the police and members of a highway robbery gang, which had kidnapped a Turkish national on the Bulgarian Trakiya highway.

The gangsters stopped the car of the Turkish national, whose name has not been revealed, disguised as policemen. They handcuffed him, stole his money and possessions and abandoned him in a region near Vakarel.

When police intervened, the criminals opened fire and in the following shoot-out one man was killed.

“The shot man is 38 years old with a criminal record for possession of drugs and illegal arms. He wore a mask and a bulletproof jacket,” Kalin Georgiev, Chief Secretary of the Interior Ministry, said.

His accomplice managed to run away unhurt and now the police is after him.

Georgiev confirmed that the Turkish man is very scared, but safe and sound.

Police found a pistol, two radio stations and policemen accessories in the car of the robbers.