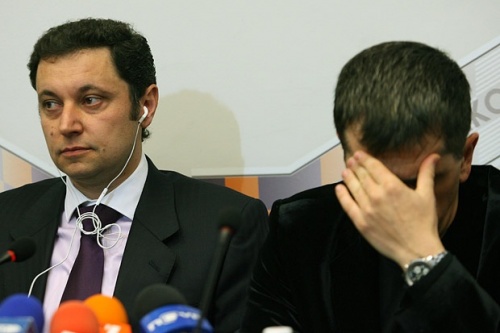 The RZS leader, Yane Yanev (l), vows to inform the European institutions about the authoritative rule of the new GERB cabinet and Prime Minister, Boyko Borisov.

Bulgaria’s conservative Order, Law and Justice (RZS) party reiterated Sunday their demand for a new Constitution of the Republic of Bulgaria.

The party issued a special declaration dedicated to the 20th anniversary of the mass rally in Sofia on December 14, 1989. On this day, scores of Bulgarians gathered on the square in front of the Parliament building in downtown Sofia to protest against Article One of the then Constitution declaring the “Dominating Role of the Bulgarian Communist Party.

“20 years later, Communism is gone, but Communists are still among us. In the new millennium old Communist dynasties still run the country,” the declaration reads.

“We, from RZS, demand one more time a change of the Change and a new Great General Assembly to adopt a new Constitution,” RZS say.

Also on Sunday, in an interview for the TV channel Nova Televizia, the RZS leader, Yane Yanev vowed to inform the European institutions about the authoritative rule of the new Citizens for European Development of Bulgaria (GERB) cabinet and Prime Minister, Boyko Borisov.

Yanev declared again that Borisov is reinstating old communist dynasties to power, saying a great number of high-ranking GERB politicians are former members of the Bulgarian Communist and Socialist party.

Yanev continues to directly accuse Borisov and GERB for the troubles faced by his parliamentary group.

The group is now non-existent and its members lost key parliamentary posts after one Member of the Parliament, Mario Tagarinski, left RSZ last Friday, bringing the number of the group members down to 9 instead of the required minimum of 10.