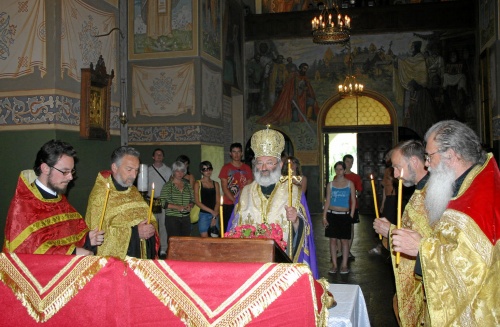 Bulgarian expats do not want the Stara Zagora Bishop, Galaktion (center), to even temporarily run the Eparchy of Central and Western Europe over his alleged ties with the Communist State Security. Photo by BGNES

Bulgarian Bishop Simeon is up in arms against the Holy Synod and vows to fight for the Eparchy of Central and Western Europe's post.

On December 1, the Holy Synod dismissed Simeon from the post citing ailing health and prolonged absences over travels to the US. The bishops say they do not want Simeon's chosen successor, his saffragan Tihon to replace him over a picture showing Tihon kissing the Pope's hand.

The Holy Synod sent to Berlin, the seat of the Central and Western Europe Eparchy, the Bishop of Stara Zagora, Galaktion, as temporary replacement just to become swamped by letters from Simeon and many Bulgarians abroad protesting the move. The Bulgarian expats do not want Galaktion over his alleged ties with the Communist State Security while Simeon threatens the Bulgarian Orthodox Church with a Strasbourg lawsuit and a “large uprising.”

For years the Bishop scents most of his time in the US, but says no one can replace him since he has a life-long tenure.

The Holy Synod counters they have adopted an emergency Synod order, based on the Bulgarian Orthodox Church's Code, they say, to hold elections for the post and insist Galaktion will temporarily run the Eparchy until the elections, which will take place in six months.