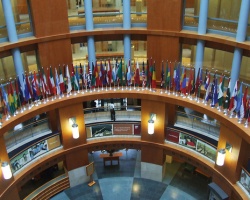 StaR is a joint project of the United Nations Office on Drugs and Crime (UNODC) and the World bank. The focus of Thursday’s meeting was the benefits of using the UN Convention against Corruption to recover assets stolen by corrupt political leaders and civil servants.

The conference was attended by representatives of 12 countries of South East Europe, from Albania to Greece. Bulgaria presented its experience from the Commission for Establishing of Property Acquired from Criminal Activity.

Dr Stuart Gilman, Deputy Director of the StaR initiative, opened the conference, stating that: "Political will is essential for effective asset recovery efforts.

"Unfortunately, corrupt senior level officials can use political influence to stop investigations or prosecutions. Without support at the highest levels of government, these criminals can get away with some of the most outrageous crimes," he added.

The World Bank estimates that USD 1 T is lost worldwide in bribes every year, and that this has a devastating impact on development. To put this figure in perspective, Theodore S. Greenberg, a World Bank specialist, announced that "the portion of the recovered assets could provide much-needed funding for social programs or infrastructure".

"I am glad that Bulgaria has hosted this important meeting," Florian Fichtl, the World Bank representative in Bulgaria, said.

According to him "the meeting provided good opportunity for all countries in the region to exchange experience how to establish a successful international cooperation in seizure and confiscation. The World Bank was honored to contribute with its knowledge assets in this area." ?

The results of the Sofia conference will support the continuing efforts of UNODC in South East Europe, as well as the World Bank's work of assisting the region’s economic development and improving the quality of people’s lives.