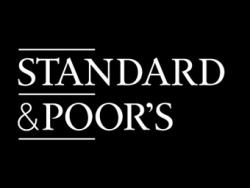 Additionally, S&P said it believes the nation's banking system appears to be well capitalized and said it was encouraged by the fact that Western banks, which have almost 85% market share in Bulgaria, expressed resolve to support their subsidiaries.

Still, S&P expressed concern about the large external imbalances and related risks tied to the world-wide economic environment, which it expects will continue next year.

S&P expects Bulgaria's gross domestic product to contract by about 6% this year and a further 2% in 2010, followed by growth in 2011.

Bulgaria enjoyed years of robust economic growth before plunging into recession in the first quarter of this year. The country has been hurt by sinking tourism revenue and shuttered factories, although the economy has avoided the double-digit economic contractions seen in Latvia, Lithuania and Estonia.

While Bulgaria is the EU's poorest member and relied on foreign funding for a quarter of its gross domestic product last year, it has so far avoided the route taken by richer neighbors such as Romania and Hungary, which received International Monetary Fund-led rescue packages.

Views on BG » Be a reporter: Write and send your article
Tags: Standard & Poor's
Advertisement
Advertisement
Expats.bg All Are Welcome! Join Now!
Related Articles:
More from Views on BG