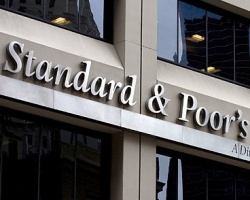 Standard & Poor's Ratings Services said on Tuesday it had revised its outlook on the Republic of Bulgaria to stable from negative. The 'BBB' long-term and 'A-3' short-term sovereign credit ratings were affirmed.

"The stable outlook reflects our view of the government's commitment to fiscal discipline. We believe this is likely to be demonstrated by the full implementation of the budgetary plan and supplementary deficit-reducing measures, should the current downturn lead to stronger budgetary pressure than what is currently foreseen," Standard & Poor's credit analyst Marko Mrsnik said.

"The outlook also hinges on our expectation that the government will implement structural reforms in the social security system, particularly in health care, despite the adverse economic environment."

According to the agency Bulgaria continues to face economic risks due to the uncertain outlook for external demand and the sharp tightening of the external commercial credit channel, which negatively affects domestic demand.

The deficit for this year is set at up to 1% of GDP, the lowest in the EU. A similarly low deficit is expected in 2010, on the back the government's plan to implement significant budgetary adjustment.