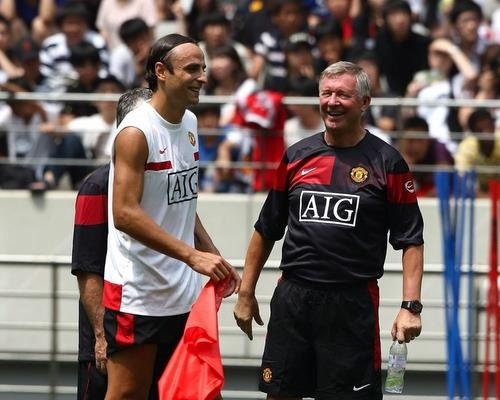 Manchester United star Dimitar Berbatov reportedly fled Bulgaria with his wife and daughter after Mafia threats to kidnap the pair.

A spokesman for Manchester United could not confirm the story when he spoke to the Daily Mail on Monday night.

Bulgaria's Blitz news agency reported that local Mafia dons had contacted Berbatov's mother, Margarita, 10 days ago to tell her that the family was in danger if the GBP30.75million signing from Tottenham Hotspur did not pay a GBP500,000 protection fee.

But Berbatov refused to go to police over the threat to his wife Elena and daughter Dea after 'underworld sources' told him that officials from Bulgaria's Internal Affairs Ministry were also in on the plot.

Instead, the star is believed to have negotiated a deal directly with the clan bosses who agreed to leave his family alone, local reports said.

Berbatov was kidnapped by a mob boss as a rising star in his homeland. He was only saved when his father managed to negotiate a settlement with a local mob boss.

'Dimi is still very worried for his family and has promised his neighbours money if they notice any suspicious people around his house,' said one family friend.

The 28-year-old was on international duty with Bulgaria last month and became his country's top scorer of all time - with 48 from 74 caps - by hitting two goals in a 4-1 victory over Malta.

A knee problem kept him out of action for United in November, though he was on the bench for the 4-1 victory at Portsmouth at the weekend.

From The Sun (UK)

MANCHESTER United ace Dimitar Berbatov fled his native Bulgaria with his family after a mafia threat to kidnap them, it was reported yesterday.

The GBP 30 million ace, 28, was flown out of Sofia on a plane arranged by United boss Sir Alex Ferguson two weeks ago.

Mafia dons warned his lover Elena and daughter Dea were at risk unless he paid them GBP 500,000.

Berbatov - kidnapped by the mafia when he was a rising star - is thought to have done a deal with clan bosses to leave his family alone.

It was the terrifying call Dimitar Berbatov has feared since becoming a major soccer star.

The 28-year-old Bulgarian striker was so scared he fled his country immediately with his family after striking a deal with the gang. And Old Trafford boss Sir Alex Ferguson is believed to have sanctioned a private charter jet to fly them back to England.

One family friend said: "Dimi is still very worried for his family and has promised his neighbours money if they notice any suspicious people around his house."

Berbatov, who was kidnapped as an 18-year-old by the boss of a rival football team, had been back home in Sofia with Elena and little Dea when mob bosses are said to have contacted his mother Margarita with their kidnap threat 10 days ago.

He is believed to have refused to tell the police after underworld sources told him officials from Bulgaria's Internal Affairs ministry were in on the plot.

It is also understood the star negotiated a deal with gang bosses who agreed to leave his family alone.

But United have beefed up security at his home in England. A club spokesman said last night: "As this is a security matter we have no comment to make."

Berbatov's first kidnap ordeal came when he was a rising star at CSKA Sofia. According to a book, confirmed by the player, he was snatched after training by three henchmen of feared gangland chief Georgi Iliev.

The thug was said to be determined to force him to sign for his club Levski Kjustendil. But as he was being taken to meet Iliev, Berbatov managed to make a frantic call to his dad Ivan who intervened and thrashed out a deal.

Talking last month about the incident, the striker said: "It was a horrific ordeal but a long time ago now."

FOOTBALL ace Dimitar Berba-tov had to rush his fi ancée and daughter out of Bulgaria after a terrifying kidnap plot.

The Manchester United striker and family were flown out on a private jet arranged by Sir Alex Ferguson.

Vicious Mafia dons in the eastern European state contacted Berbatov’s mother Margarita to warn that his daughter Dea and his partner Elena Shtilianova were in danger if the star did not pay a GBP500,000 ransom.

The footballer, 28, who earns about GBP100,000 a week, refused to involve the po- lice because underworld contacts had warned him they too were in on the plot, it is claimed.

After a week of tense negotiations between Berbatov and crime lords in his homeland, he has been given assurances his family are now safe.

But the striker is not taking any chances and has offered neighbours of his family in Bulgaria’s capital Sofi a cash to report any suspicious activities to him.

Friends admit the star has been left shaken by the ordeal. A Man Utd source added: “He under- stands that with success sometimes comes problems, but when people threaten your family, it’s a step too far.”