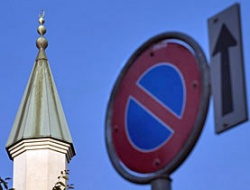 Switzerland rejects future construction of minarets, but government guarantees religious freedom is not in jeopardy. Photo by swissinfo.ch

Swiss voters turned out on Sunday to decide by referendum whether Muslim mosque minaret construction should be banned.

The official result of the referendum, according to Swiss media, has been confirmed, with 57,5% voting in favor of the ban. Turnout was 55%, which means the result will stand, given a minimum 50% requirement.

Opinion polls had previously predicted a close rejection of the ban, that had been championed by right-wing and ultra-conservative Swis groups and parties.

The Swiss government and most political parties, as well as churches and the business community had come out strongly against the ban, which will now have to be incorporated into the Swiss Constitution.

"A majority of the Swiss people and the cantons have adopted the popular initiative against the construction of minarets. The Federal Council respects this decision," a government statement said.

"Consequently the construction of new minarets in Switzerland is no longer permitted. The four existing minarets will remain. It will also be possible to continue to construct mosques."

The statement said that freedom of belief would not be affected. "Muslims in Switzerland are able to practise their religion alone or in community with others, and live according to their beliefs just as before.”