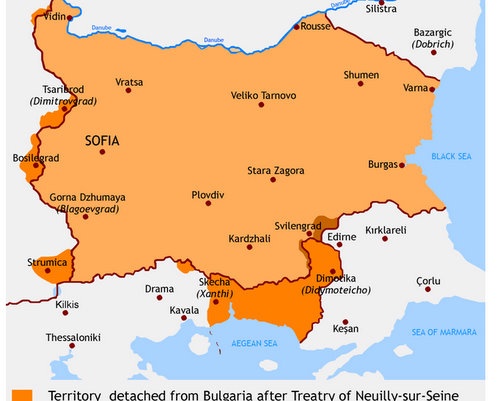 Various gatherings and initiatives around Bulgaria on Friday were dedicated to remembering the 90th year since the signing of the Treaty of Neuilly-sur-Seine.

The Treaty of Neuilly-sur-Seine was the document ending World War I between Bulgaria and the Entente, dealing with Bulgaria for its role as one of the Central Powers in World War I,

It was signed on November 27, 1919 at Neuilly-sur-Seine, France, and is seen in Bulgaria as the ultimate disaster for the Bulgarian nation’s strife for national liberation and unification.

With the Neuilly Treaty Bulgaria’s claims to wide swaths of territories in Macedonia, Thrace, and Dobrudja, largely populated by Bulgarians, suffered a terrible defeat.

In addition, the treaty required Bulgaria to cede Western Thrace to the Entente, (which ceded it to Greece at the San Remo conference) thereby cutting off its direct outlet to the Aegean Sea,

An area of 2563 km² on the western border to the Kingdom of Serbs, Croats and Slovenes. The treaty also forced Bulgaria to return Southern Dobruja, which had been captured during the war and restored the border set by the Treaty of Bucharest (1913). (Southern Dobrudzha was restored to Bulgaria in 1940.)

In Bulgaria, the results of the treaty are popularly known as the Second National Catastrophe. Bulgaria regained South Dobrudja as a result of the Treaty of Craiova and during World War II together with Nazi Germany, temporarily reoccupied most of the other territories ceded by the treaty.