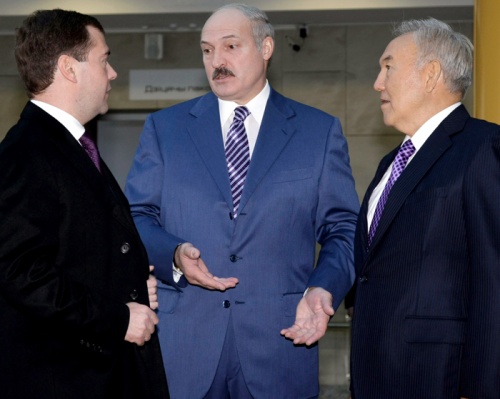 The presidents of Russia, Belarus and Kazakhstan have reached agreement on the creation of a customs union among the three ex-Soviet states from July 1, 2010.

"This is a very significant and long-awaited decision, resulting from difficult negotiations," Russian President Dimitry Medvedev announced in Minsk, the capital of Belarus, on Friday.

"This switch to a joint economic zone is a completely new economic format," he stated, adding that the three-state union would in future be open to other members.

"From July 1, the new customs union will begin to function on the territory of Russia, Belarus and Kazakhstan," Belarussian President Alexander Lukashenko said.

Nursultan Nazarbayev, Prsdient of Kazakhstan, estimated that the creation of the new trade bloc would lift the GDP of each of the three countries by 15% by 2015.

Russia's Prime Minister Vladimir Putin had surprised the World Trade Organization (WTO) in June, by saying that Russia would apply to join the trade organization as a single customs bloc with Belarus and Kazakhstan.

Russian President Medvedev has since said that each country would pursue membership with the WTO separately, despite an effort to coordinate their accession talks.

Russia is the only remaining major world economy not to be integrated into the WTO system. Accession talks began in 1993, but the United States has called Russia's accession into question after its war with Georgia in August 2008.