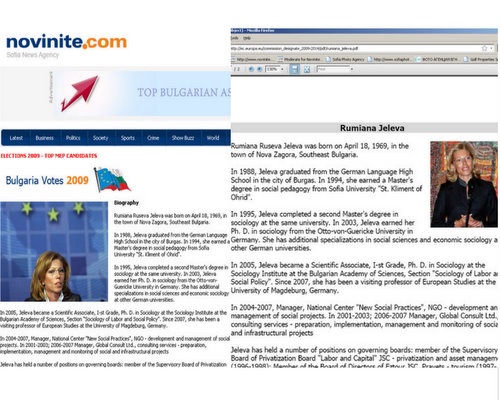 The Novinite.com article on Rumiana Jeleva's CV from the MEP elections campaign in May 2009 has been reprinted by the European Commission when Jeleva was formally named among the new EU Commissioners in November 2009.

The European Commission has used an article of Novinite.com (Sofia News Agency) in order to present in English the biography of the new Bulgarian EU Commissioner, Rumiana Jeleva.

Shortly after EC President, Jose Manuel Barroso, announced the portfolios of the new EC , the Commission press service released the CVs of the designates.

The CV of Bulgaria’s new Commissioner, Rumiana Jeleva, available on the Commission website HERE ( http://ec.europa.eu/commission_designate_2009-2014/pdf/rumiana_jeleva.pdf ) appears to be a 100% copy from the biography article on Rumiana Jeleva that Novinite.com published in May 2009, while Jeleva was still a candidate of the GERB party running for a reelection as a Member of the European Parliament in the June 2009 elections.

We, the Editorial Team of Novinite.com, Bulgaria’s largest English-language media, would like to express our satisfaction with the fact that the European Commission sees our media as very trusted and reliable source of information about Bulgaria in English.

This is obviously the case since its press service has reprinted an exact copy of an article of ours on such an important occasion as the announcement of the new EU Commissioner portfolios! We have had a long and fruitful cooperation with the European Commission in Brussels and its representation in Sofia and hope that this will continue in the future.

Our team does realize the crucial role that Novinite.com plays for all citizens of the EU who wish to learn and know about Bulgaria but do not speak Bulgarian, thus serving an important function within the Union through its reliable, up-to-date English-language content.

However, we also like to express our regret over the fact that Novinite.com (Sofia News Agency) is not credited as the source of the CV of Rumiana Jeleva published on the Commission website. We would be thankful to the EC press service if this omission could be rectified.

In addition, we would like to alert the press service of the European Commission that the article they reprinted from Novinite.com on the CV of Rumiana Jeleva is not up-to-date since it was published in May 2009. Thus, it does not include any information on the last six months of the life and political career of Rumiana Jeleva (who in the meantime got reelected to the EP and even became Bulgaria's Foreign Minister!).

In order to rectify this situation, we recommend that the press service of the European Commission should use the most recent article with biographical information on Rumiana Jeleva published by Novinite.com (Sofia News Agency) immediately after the portfolio of the new Bulgarian Commissioner designate was announced. It is available HERE ( http://www.novinite.com/view_news.php?id=110464 ), and it does build upon Jeleva’s original CV that we published in May 2009, including information on her in the time since them.

We would also like to stress that Novinite.com uses American English spelling, which means that the EC press service should probably change the Jeleva CV article to British English spelling since the latter is the norm in the EU institutions.

We do hereby grant the European Commission press service the right to reprint it.

Finally, we would like to use the occassion to wish Bulgaria's Rumiana Jeleva and all other members of the new European Commission the best of luck and lots of success in their work!