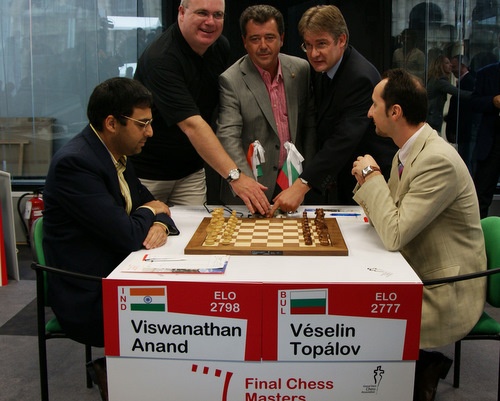 Viswanathan Anand and Veselin Topalov play a chess game during the tournament in Bilbao in September. Photo by BGNES.

The contract to hold the final Chess World Championship Match in 2010 in Sofia will be signed on December 16, FIDE reports.

The President of World Chess Federation (FIDE), Kirsan Ilyumdzhinov, will arrive in Bulgaria on that day on the invitation of Prime Minister, Boyko Borisov, who is also the Chair of the match's organizational committee.

The two will sign the contract for the chess face-off between current world champion Viswanathan Anand from India and Bulgaria’s chess master Veselin Topalov, who is currently number one in the FIDE world ranking (Anand is third).

After the signing of the contract FIDE is expected to announce more details about the final.

FIDE decided in October to select Sofia as the host of the match.

Topalov and Anand will play 12 games. In case they finish with a tie, they will hold a tiebreaker including 4 games of fast chess.

It was reported Thursday that the funds for the match are already secured with the President of the Bulgarian Chess Federation saying the entire budget of about EUR 3 M is provided by sponsors.

The exact dates of the game are still to be finalized. Bulgaria has proposed the April 5 – 24 time period.