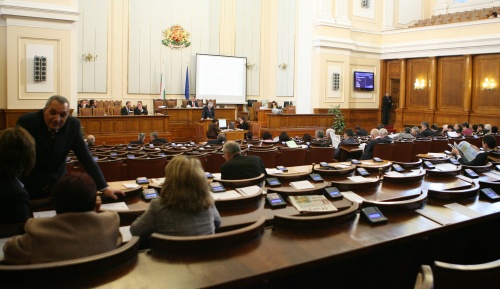 Despite the fact that last week the Parliamentary Budget Committee approved a higher alcohol excise, the MPs complied with the request of PM Borisov to not touch the alcohol tax. Photo by BGNES

The Members of the Bulgarian Parliament voted Thursday to keep the current levels of hard liquor and beer tax all through 2010.

The MPs voted on second reading despite the fact that last week the Parliamentary Budget Committee approved a higher alcohol excise.

On Wednesday Bulgaria’s Prime Minister, Boyko Borisov, asked the MPs to reconsider their stand on alcohol duties saying he made a commitment the vine growers – an appeal with which the MPs complied Thursday.

The only exception was made by the conservative “Order, Law and Justice” party (RZS) which stated they supported the move to not raise the hard liquor tax, but continue to insist on increasing the beer excise.

The leader of RZS, Yane Yanev, said Borisov had not asked to keep the beer excise the same. On Wednesday, Yanev made statements that in the middle of 2010 his party will propose again an alcohol excise hike and Borisov’s ruling Citizens for European Development of Bulgaria (GERB) party would then support them as part of the agreement they made.

The RZS MP, Darin Matov, presented the increase of the beer tax as a form a protection of the Bulgarian vine growers and wine makers, saying 95% of the breweries in Bulgaria are owned by foreign companies. He also noted the higher beer tax will prevent beer consumption on the part of minors.

The ethnic Turkish Movement for Rights and Freedoms (DPS) says the problem is not in the tax amount but the lack of State and Customs control on alcohol sales.

Earlier Thursday, the MPs voted to increase gambling tax by 15% to compensate for maintaining the alcohol tax levels.