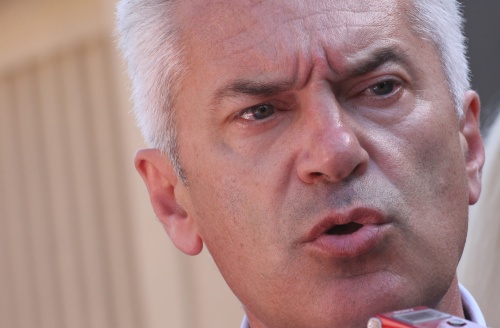 The leader of Ataka, Volen Siderov, and fellow party members want to eliminate broadcasts in languages other than Bulgarian on State TV and Radio. Photo by BGNES

The changes involve canceling TV news broadcasts in languages other than Bulgarian. The proposal is signed by 14 Members of the Parliament (MPs), including the leader of Ataka, Volen Siderov.

Ataka base their request on the motive that the current directives allow inadmissible opportunities for some minorities to stir separatist feelings.

“Bulgaria is a state of one nationality and it is unacceptable to have any divisions on ethnic or racial bases,” the proposal reads, citing Article 4 of the Bulgarian Constitution which postulates Bulgarian is the official language of the country. According to Ataka, the Article means that information broadcasts on State radio and TV in languages other than Bulgarian are illegal.

On Wednesday, Bulgaria's MEP, Metin Kazak, voiced his strong disagreement with the elimination of the news broadcast in Turkish from the program line-up of Bulgaria's National Television (BNT).

Kazak, who is a Member of the European Parliament from Bulgaria's ethnic Turkish Movement for Rights and Freedoms (DPS), told his colleagues the move is a sign of intolerance and discrimination and will deprive Bulgaria's largest minority of the right to receive information in their native language.