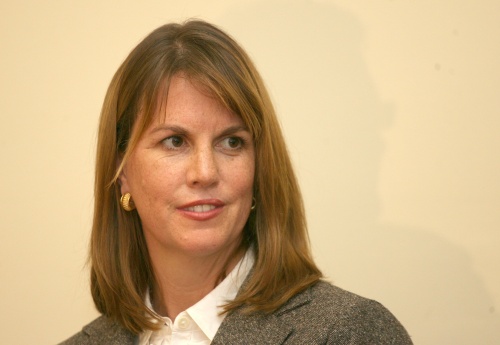 American writer Elizabeth Kostova has made her fascination with Bulgaria world-known through her novel "The Historian". Photo by BGNES

Elizabeth Kostova (née Johnson) was born in New London, Connecticut in 1964, and now lives in Ann Arbor, Michigan. She graduated from Yale and holds an MFA from the University of Michigan.

Kostova is best-known for her debut novel, The Historian, which took her ten years to write, and was inspired by the vampire stories told to her by her father, a professor of urban planning, during the year they spent in Ljubljana, capital of Slovenia (where her father taught at the university) when she was seven, and as they traveled through Europe. The Historian, published in 2005, tells the story of a young woman who seeks to discover the grave of Dracula, and much of it is based in Bulgaria. The publishing rights for The Historian were sold for USD 2 M in 2004.

Elizabeth Kostova came to Bulgaria for the first time in November 1989 attracted by Bulgarian folklore music; her first visit coincided with the time of the November 10, 1989, events over the fall of the communist regime and the first mass pro-democracy demonstrations in Sofia.

At that time Kostova met her Bulgarian husband, Georgi Kostov, a computer science specialist. She had adopted a Bulgarian family name with a Bulgarian ending denoting the female gender, which is untypical of the English language (i.e. “Kostova” instead of “Kostov”).

In 2007, she founded the Sofia-based “Elizabeth Kostova Foundation” which has been active in promoting creative writing and fiction, and the translation of English-language literature into the Bulgarian language. The Elizabeth Kostova Foundation administers the “Krastan Dyankov” Award of USD 2 000, an annual award for translators of fiction into Bulgarian named after the famous Bulgarian translator and journalist Krastan Dyankov (1933-1999).

Much of your best-selling novel “The Historian” is about Bulgaria. Why does Bulgaria play such a big role in your story? Why does Dracula live in Bulgaria, according to your book? For example, this has led Bulgaria’s current Diaspora Minister, Bozhidar Dimitrov, who is a famous nationalist historian, to cite your book as a proof that Dracula was of Bulgarian origin.

Well, Bulgaria plays a big role in my first novel partly because I wanted to write about Bulgaria. I have been here off and on for many years, and I love the country very much. Also, Bulgarian history from this period – the 15th century – is very interesting, rich, and I wanted to be able to include some of that – about the monasteries, for example. They are really fascinating.

I think there is some misunderstanding about the idea that Dracula comes from Bulgaria. As you know if you have read the book, that is not the case. Dracula in my story comes very much from Wallachia, where the inspiration for the character really lived.

And Bulgaria for him is just a kind of hiding place. In a way this is a very positive thing because the monastery libraries in Bulgaria were and are incredible. So when I was thinking, if you were a great librarian, where would you go in the late Middle Ages? Well, you would probably go to a Bulgarian monastery. And of course, this is totally fictional.

Since we mentioned the character of Dracula and where he came from what is your idea about the Balkans, the vision for this part of the world that you convey?

I think the Balkans have one of the most complicated histories of any part of Europe, and the kind of diversity of tradition that exist here, and whose paths crossed here – I mean I am not very sure there is any parallel anywhere else. It is just an incredible source for writers.

This is probably a question you have answered many times but what is with the Bulgarian ending of your family name? So instead of getting the name “Kostov”, you added the ending “a” denoting female gender as if you were a Bulgarian woman. Why and how did you decide to adopt it?

When I married a Bulgarian, I wanted to keep this tradition. And actually, I always thought I would keep my own name when I got married which is now a standard American thing for women to do often, not always but often.

But then I saw that if I honored this Bulgarian tradition, I would get a beautiful name of my own. And it is a great tradition, it is very clear, and it is so normal here, I think it would be strange not to do it.

You’ve made it clear in many interviews and public appearances that you very fascinated with Bulgaria. Is that right?

You are absolutely right.

What is the source of your fascination with Bulgaria? Can you point to one really fascinating think about Bulgaria that every American, or Westerner, or foreigner should know?

It is hard for me to choose one thing but I first came here because I was fascinated by the traditional singing of Bulgaria, which is something that attracts many Westerners. It’s a very beautiful, complicated tradition. So I came here first to listen to and study “narodni pesni” - folk songs. And I am not a very mystical person, actually. Although I wrote about Dracula, I like legends but I personally am not very mystical.

But when I first came to Bulgaria, it was early in the morning, I was on a train, it was November, 1989, exactly 20 years ago this week, a great week in Bulgaria’s history because of the events that were happening.

But with my first sight of Bulgaria I felt something very deep. And I don’t have logical explanation for that. I didn’t have a family here, I don’t have ethnic connection with this place. No one in my family had ever been here although we had lived in the former Yugoslavia. But this is a very different place. I really felt as if I had some strange connection.

You witnessed this revolution of a sort here in November 1989. What was your thought of that back then as a young American who had just arrived? What’s the most vivid memory that you got?

It was a very moving time to be here. And I was a young person among young people who were very excited about these changes. I think I had two most vivid memories at that time.

One is the memory we all had of the first really big demonstration, THE big demonstration in Sofia. And this occurred just a couple of days after I arrived here. And it was a sight and sound and feeling you never forget all your life – even if you are a foreigner and an outsider.

And the other memory I have of that week is the street theater outside, the political pantomime, people dressed up, a kind of an incredible interpretation through theater on the streets of what was happening politically.

I have to say very honestly, it’s been sad to me and a little shocking that this event has not been celebrated more in these two weeks in Bulgaria, now, 20 years later. Because I think it is really important not to forget how moving these events were. Even if a lot of difficulties have happened since then, it was still a great opening to the world.

In 20 years, Bulgaria went through a lot. It is now probably best known internationally for corruption and organized crime. What is your thought of Bulgaria today, after 20 years of post-communist transition? How do you see this country?

I think it is very easy to feel discouraged about things that have happened here. But I have also over the years, I have seen a lot of talent and energy emerge here. This has been a very long slow process, and sometimes a sad one.

But I think it takes a long time for a society to recover from 40-50 years of serious repression. And I also think it would take some generations to pass for things to be normalized. And I feel deeply optimistic that this will happen. Bulgaria has so much talent and so much brain power that it is inevitable. But it may take nearly as a long as the period of repression.

Bulgaria has recently elected a new Prime Minister, who might be controversial for many but is seen by most as a rather interesting character. Do you think he can be a hero of a novel such as “The Historian”? From your impression - would he be a good, or a bad hero?

I usually don’t comment directly on politics. But I will say that I am a fiction writer and I think everybody and everything in the world can be material for fiction.

Through the “Elizabeth Kostova” Foundation you have been very active in promoting talent in Bulgaria in the field of fiction and translation. How has your work here been received, has it been successful?

I just want to say how grateful I am for the response of writers and editors and publishers to these projects. It’s been wonderful. And now that we have held our international fiction seminars in Sozopol for two years, and the reaction of the American and other international writers who come here is really superb.

People go away very excited about the writers they meet here, about the events, about the history they learn. They have been really excited. I hear from them often what a deep experience this was for them to come here. And I think it has also been exciting for the Bulgarian writers. And I am sure we will be including more and more as times goes on.

Do you see yourself coming to live here, and if yes, where would that be?

I certainly hope so. I think I would really enjoy living in Sofia at some point or eventually because of the literary community here. And all of the arts, the very strong arts community.