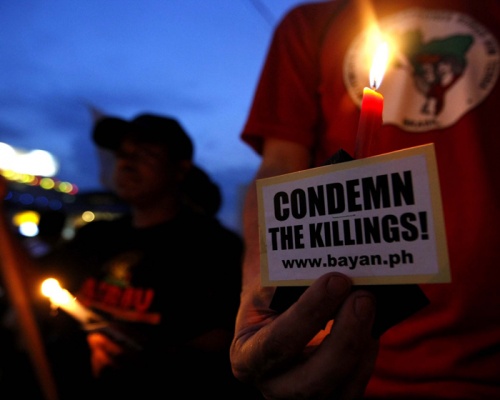 The confirmed death toll in the Philippines massacre has risen to 52, with the prospect of further bodies being discovered. Photo by BGNES

The death toll in Monday’s pre-election violence rose to 52 on Wednesday, Philippine authorities said, as six more bodies were recovered.

There is growing international condemnation of the slaughter of politicians and journalists in the southern region of the Philippines.

President Gloria Macapagal Arroyo has declared a state of emergency in the contiguous provinces of Maguindanao and Sultan Kudarat and in the city of Cotabato on the southern island of Mindanao. The measure gives the police and army the authority to apprehend and detain those who carried out the slaughter.

A group of politicians and political supporters, accompanied by Filipino journalists, were traveling to file nomination papers for Esmael Mangudadatu, an opposition election candidate in Maguindanao province, when the attack occurred on November 23.

The group was ambushed by a gang of about 100 armed men who took the victims to a remote location where some of them were killed and buried in a mass grave.

More members of the group are missing, and are also believed to have been murdered. There is evidence that the journalists were specifically selected for murder, according to investigators.

France on Tuesday strongly condemned what it called an "appalling" political massacre.

"France condemns in the strongest terms the appalling massacre yesterday in the Philippines," a foreign ministry statement said, adding that it was "essential" that next year's national elections be held peacefully.

The World Association of Newspapers and News Publishers (WAN-IFRA), the global association of the world’s press, called on the Philippine government to urgently investigate this monstrous attack and bring its perpetrators to justice.

International organization Reporters Without Borders also denounced the massacre: “Never in the history of journalism have the news media suffered such a heavy loss of life in one day,” they announced.

The understanding is that this massacre is the result of traditional clan warfare in the region. According to the Center for People Empowerment in Governance, a nonprofit group, there are some 250 rival groups in the area. For many of them and particularly those in the south, politics is literally a blood sport, with the clans’ power and income riding on the outcome of elections.

The next elections in the Philippines are scheduled for May 2010.