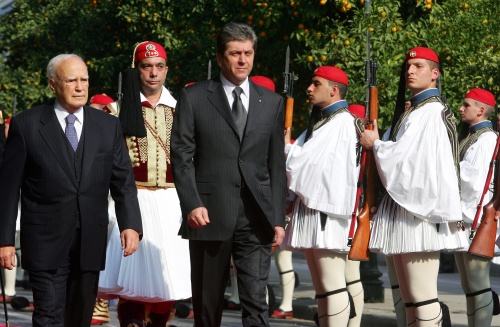 Bulgarian President, Georgi Parvanov, is on an official visit to Greece on the invitation of his counterpart, Karolos Papulias. Photo by BGNES

The new Kardzhali-Komotini border cross point between Bulgaria and Greece will open in 2010 to ease the increased automobile traffic between the two countries.

The news about opening the border point, also known as Makaza, was reported during the Tuesday official meeting between the Bulgarian President, Georgi Parvanov, and his Greek counterpart, Karolos Papulias.

Parvanov is on an official visit to Bulgaria's southern neighbor on Papulias' invitation.

The two have discussed the pending need to accelerate the opening of new border points, including local ones over the 1 M of tourists crossing the common border each year as well as the needs of population in the border areas.

The presidents also held talks focused on the mutual collaboration in the energy sector and the area of energy security such as the faster completion of the gas line Stara Zagora-Dimitrovgrad – Komotini, whose prime importance was strongly felt during the gas crisis in January 2009, Parvanov said, adding such collaboration is an integral part of the European energy security

The Bulgarian Head of State and Papulias voiced their common will to support the EU accession of the Western Balkans.

Papulias had further informed Parvanov about the official Greek position regarding the name of the Republic of Macedonia.

A program for bilateral collaboration in the areas of education, science and culture for 2009-2011 period has also been signed during the official meeting.